Before we start talking about a bike I believe we first have to know how it ended up being a bike. With the DR650 it’s a simple task. In fact, the base idea of creating the DR650 was very simple: Suzuki needed a big offroad bike. In the late 1980s they did had the DR600 but it wasn’t quite powerful enough for customers who knew there were bigger machines on the market, like the Honda Dominator650. They started developing a new, bigger bike which would offer all the satisfaction needed and this is where DR650 enters the scene. The bike arrived in the early 1990s in two different versions: DR650 Djebel and DR650RS. They shared the same mechanics but the looks were quite different. The RS was a lighter model, featuring a small exhaust system, quite different from the Djebel (also called DR650R Dakar). But the most obvious difference between the two is that the Djebel didn’t feature the RS model’s fairing and it had a dirt bike styled higher front mudguard.

Both DR650 models were basically an enlarged DR600 (bigger bore and longer stroke) with upgraded Frame: and suspension sharing the same 21 liters fuel tank and a massive aluminum luggage carrier.

Suzuki continued developing the DR650 and in 1991 it presented the DR650RSE with electric start with automatic decompression system. The bike also got fat, it was big everything but with a purpose and that purpose was the electric starter which needed a larger battery (12 Ah instead of 5) and more efficient alternator (200 W instead of 180) causing an extra Weight: of 15 kg (33lbs).

In 1992 they changed some features of the bike: this model got a smaller fuel tank (17 liter instead of 21) and the aluminum rear carrier was replaced with a smaller one. The changes, among with other refinements, made it possible to give the model 8 kg (17, 6 lbs.) lower dry mass. The exhaust system was enlarged for better low-rev torque and the Rear Suspension: was improved. This is also the Year: when Djebel changes name to DR650R.

The model wasn’t significantly improved until 1996 when it was revised for better handling and less Weight: . They had to sacrifice power for a better low-rev delivering, making it more comfortable to use. The smoother and yet less powerful Engine: was made by upgrading the exhaust system again and increasing the bore by 5mm (0. 196 in.) and shortening the stroke by 8mm (0.315 in.). The new Engine: ran very smoothly and didn’t vibrate nearly as much as the Engine: of the RSE. The same Engine: featured a new oil cooler that Year: .

It was clear that the bike was on a diet: the seat was narrower, which means it wasn’t so comfy when riding long distances, the fairing reduced to a small top fairing without a windshield and the suspension and the Frame: were totally new and improved. All this changes made the bike 25 kg (55lbs.) lighter than the DR650SE.

Through the Year: s it kept being produced and ridden by people all around the world, without major changes. The colors kept changing every Year: , but the product remained the same.

In 2008 the Suzuki DR650SE features a lightWeight: SOHC four-stroke Engine: tuned for strong low and midrange power and fuel efficiency with a single counterbalancer system.

It has gone a long way but it was worth is! 2008 Suzuki brings us a reliable and very enjoyable bike, the DR650SE. 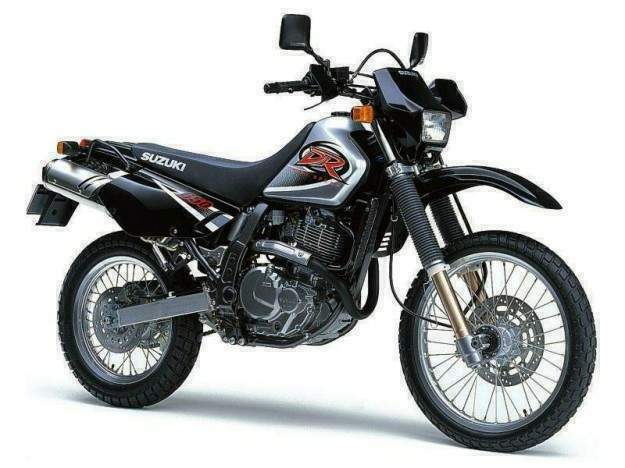