With the way supermoto has taken off across the globe, manufacturers are on the gas for 2007. As the sister company of arguably the most advanced SuMo machine producer, KTM, Husaberg has upped its bet in the Unlimited class with this 550cc beast.
You’ll notice a distinct lack of any kickstart lever in this photo. That’s because it’s on the other side, but that doesn’t mean the foot lever gets used regularly. Electric starts were fast, easy and very useful for SM purposes. Stalling the motor is easy to do in dirt sections where a lack or traction allows the rear tire to lock up easier than normal.

I arrived at the track to find that only perhaps a dozen riders were on hand for this particular Thursday afternoon supermoto session. With so few riders, finding my target in the pits was an easy task. The guys at Bike Barn Motorcycles had invited me to try out their latest machine, the brand-new Husaberg FS550e. As the only Husaberg dealer in the Rogue Valley, I jumped at the chance to ride a bike that remains relatively scarce in our neck of the Southern Oregon woods.

Having collaborated with the Bike Barn during our 2006 450 Enduro Shootout I knew exactly what to expect from, and who to look for, owner Kurt Beckman. I found him under the bright yellow and blue E-Z Up, but I didn’t recognize the Knight Rider-looking dude beside him dressed in black leathers and riding some sort of black supermoto steed.

By the time I parked the van and made my way over for a handshake, the man was gone. Surveying the area from behind the dark anonymity of my sunglasses, I noted with a sense of worry that Beckman’s trailer was devoid of the Husaberg I was slated to ride. Scanning the track revealed a few KTMs, a Yamaha and the man in black, but no yellow-and-blue Husaberg. As my visual search became increasingly frantic, the black machine came rumbling back and slid into our small square of shade. Only then did I recognize that this would be the machine I’d be riding.

The FS550e gets a healthy dose of Mad Max ‘tude with its black bodywork, fork tubes and 17-inch wheels along with blue graphics. Combine that with the stubby front fender, squatty SuMo stance and Husaberg’s signature chassis design, the FS550e is a stark outline of wicked intent. Judged solely by glossy photos against a white background, the new bruised motif is a hot ticket. In the real world, however, that indistinguishable color scheme yet distinctive body style come off differently against a natural backdrop of dirt and asphalt. By the end of our short test session, the Berg was still very fresh, but as we all know, that black plastic is going to morph from hot to horrid in the span of only a few rides.

The graphics package this Year: only tells half the story, no matter which way you look at it. The left side is adorned with a large, blue block-lettered HUSA, while the right side finishes the label off with a titanic-worthy BERG. Like the 2006 enduro model, the 550e has a visually bulky tank, though the Capacity: is the same on the new bike. The 2.8-gallon tank is different however in that it feels slimmer between a rider’s knees as they straddle the 34.3-inch seat height.

With an emphasis on the Unlimited class in American supermoto racing, Husaberg offered only the 650cc machine in 2006. For’07 the company has created the new street-legal FS550e based on the existing enduro machine. Only the street-legal versions of both the 550 and 650 will be imported this Year: , though Husaberg is making an FS650c competition model overseas. Since having one of these bikes and not being able to ride it around town would be a crime, we weren’t even disappointed that 550c models aren’t available at all this Year: . The only difference between a FSe and FSc models are the inclusion of a headlight, taillight and plate holder, kickstand and more street-oriented Michelin Pilot Sport tires, which add up to a claimed 4.4-lb difference. According to the spec sheet, our 550e has a claimed dry Weight: of 247 lbs. 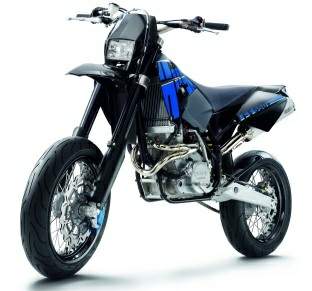