As far as I know, Harley-Davidson has never before launched a new motorcycle exclusively first in Europe. In Valencia, Spain, Harley did, and the XR1200 was launched in a big way to virtually anyone that can walk and talk in the European motorcycle press.
The XR1200 is as close to a true sportsbike Harley-Davidson is ever going to make (except for the ill-fated VR1000 Superbike –Ed.). It’s air-cooled with a modified 1203cc Evolution V45 from the Sportster range. To make it more powerful than the rest, the XR1200 features a larger air-box, downdraft fuel injection and a performance-biased exhaust system. The result is a claimed 90 horsepower at 7.000 rpm and 73.8 ft-lbs of torque maxing at a low 3.700 rpm.

The XR1200 puts out a claimed 90 horsepower at 7,000 rpm and 73.8 ft-lbs of torque maxing at a low 3,700 rpm. The enlightened will know that a Buell makes more horsepower than this with similar technology.

The dual over-under up-swept exhaust is a signature design item and iconic to the XR1200’s inspiration, the XR750 flat-track dominator.

Riding the XR1200 aggressively through mountain passes and valleys was a very pleasing experience. Tor had to keep reminding himself that he was on a Harley, not a Buell!

The enlightened will know that a Buell makes more horsepower than this with similar technology. The reason the XR1200 doesn’t make a full 100 horsepower was explained to me by one of the Milwaukee Engine: ers as being down to a lower volume airbox and different exhaust system. Harley-Davidson would never ever sacrifice style completely over performance and that is the reason.

The XR1200 sure makes a presence different to most other motorcycles. It’s unique from the Motor Company, and the only other motorcycle on the market I can find for some sort of comparison would be the Euro-only Yamaha MT01!

At the same time, if it hadn’t been for the 1970 launch of the 90-horsepower XR750 for flat-track racing, we would not have seen the XR1200. That the new 1200 makes the same horsepower as a 38-Year: -old bike will have to be forgiven, as modern noise and emission regulations don’t allow for much more.

‘The XR1200 sure makes a presence different to most other motorcycles.’

This early morning in April, I have the privilege of following Wrecking Crew member number 1 Scott Parker into the mountains on the XR1200. Parker is 9 times AMA champion and the most successful rider on the most successful flat-track racebike ever.

Not long after, Scott Parker and Brommie stunt-monkey Craig Jones were doing monos worth a gold medal up in the mountains. There’s no doubt in my mind after doing some of my own, this Harley is the most fun Harley-Davidson I have ever ridden! So it wheelies, but even more impressive is the ability to go fast through the tight corners in the Spanish mountains. True, the XR1200 is pretty much heavier than any other European brand motorcycle it is supposed to compete with. But once on the move it handles brilliantly and the monstrous torque curve is just a delight to use.

This Harley has got tires to match its abilities fully in the Dunlop Qualifiers. Using an 18-inch flat-track-style front wheel, the Qualifiers have been specially designed for the big Harley. With a 551-lb claimed dry Weight: , the XR is probably a little bit heavier than what the Qualifiers was intended for in the first place. But never mind, they stick like glue to the tarmac and only the footpeg feelers touch the ground. To me, those footpegs and feelers are the most annoying thing about the XR1200 package. At a standstill, I hit the feelers with my ankles, and getting back on the move I drag the footpegs up and they haven’t got spring action to bring them back down again. The Harley Engine: ers that I spoke with told me that this was the first issue that they would address ahead of mass production scheduled for this spring.

The seat is quite thin and sporty, and the seat height is a low 29.2 inches. The handlebar is very wide and this makes it easy to wrestle the XR to its sides. The lean angle is very good, but despite the fact that it looks like the right exhaust side will touch ground first, it’s actually the typical Harley sidestand on the left that will touch first. The clutch cable looks fairly exposed and as if it will start grinding leaning the XR to its extreme left. It shouldn’t and it didn’t, it just looks that way. The whole mid-placed exhaust cover will grind on the right-hand side. Despite the fact that the XR1200 is the sportiest Harley ever, it still has got plenty of styling compromise.

Harley aficionados will frown upon the fact that there’s a plastic tank and rear fairing sides on the XR1200. The headlight is a standard Sportster item, and the double rear shocks remind me of a Sportster too. The travel is a short 3.5 inches at the back and 4.9 inches from the 43mm USD fork. That aluminium swingarm does not remind me of anything found on other Harleys, though. It looks technical and light.

Mounted on the 18-inch front wheel is a pair of 4-piston Nissin calipers providing plenty of stopping power. I can’t help it, but I am really glad that Harley-Davidson have kept Harley clutch and brake levers as they feel really good to use. The 5-speed gearbox was brilliant and not heavy to use at all. 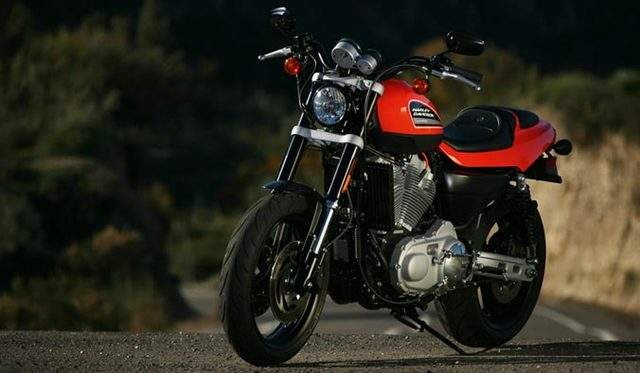