In launching the 900 Superlight in 1992. Ducati revealed a new-found ability to broaden its range with a new bike that was closely related to an existing model. The Superlight was a sportier version of the 900SS. the air/oil-cooled, two-valvcs-per-cylinder V-twin that offered a simpler and less expensive alternative to the Bologna firm’s more powerful and exotic eight-valve superbikes. Ducati hardly needed to produce another new model, because the 900SS itself had been successfully restyled and updated only the Year: before. But the Bologna firm saw the opportunity to create a significantly more sporty bike with little extra effort. Hence the arrival of the Superlight, complete with more aggressive image, reduced Weight: and no room for a pillion. With the exception of a ventilated cover for its dry clutch the Engine: was unchanged.

That meant a 904cc. 90-degree. SOHC desmodromic V-twin, cooled by oil and air, and putting out a 73bhp at 7000rpm. (Ducati by now measured power in a more conservative way than in previous Year: s.) Much of the chassis was also borrowed from the 900SS, including the steel ladder Frame: , Showa upside-down forks, and rear shock unit from the same Japanese firm. The Superlight got its name from its Weight: -reducing chassis modifications. 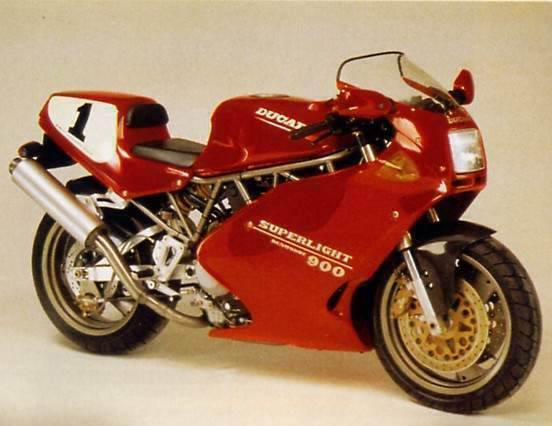