The Indiana was the response of Ducati to the US Custom cruiser fashion. Each maker responded to the invasion of Japanese cruisers with a version of the road touring bikes they had at home: Guzzi simply changed the bodywork of its small block series and made the “C” series bikes, then the Florida; Morini built a very extroverted “Excalibur” (Morini had the advantage of having a V Engine: that looked slightly Harley-Davidson-ish), Ducati took…. The Elefant and modified it. Modifications were few but cunning: away went the progressive single shock, in came two paired chrome plated shocks, the front end was virtually that of the Elefant, but with simpler hydraulics, the wheels were, more or less, those of the later Alazzurra.

The Elefant motor received a pair of Bing CV carbs for better smoothness. A lot of chrome and a very classic American-style looks with a relaxed riding position completed the figure. The result was a bit intriguing: you knew from the start that this was not an ordinary cruiser.

A Ducati desmo motor on a sedate cruiser? Sedate it was not. Despite all attempts of Ducati to make it slow, and hard steering, the Indiana was a fast, quick steering bike, in cruiser terms of course, and it had a mighty Engine: . It could easily outrun any cruiser of the same Capacity: , and most cruisers of any Capacity: . 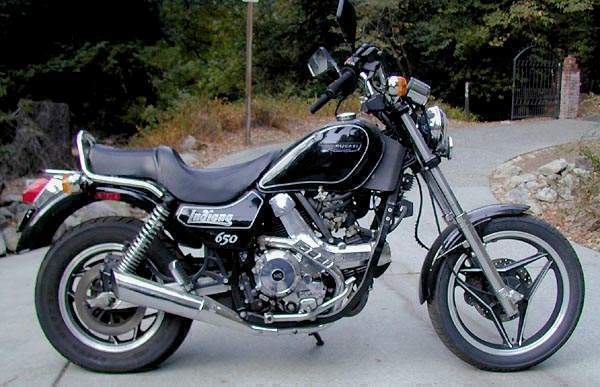