Don’t be deceived by the mid-sized Engine: – Rod Chapman of Motorcycle Trader magazine has discovered the perfect all-rounder, and fallen head over heels…

The Italians have got it made, don’t they? A beautiful country, gorgeous women, great food – and when it comes to Italian motorcycles, they’ve got the perfect mid-Capacity: all-rounder too.

Yes, after taking the Cagiva Raptor 650 for a spin I was thoroughly impressed, even if it hurt to say so, given the way Italy knocked the Socceroos out of the World Cup.

Initially debuting in 2001, the current Raptor is essentially still the same machine, bar slightly updated styling and a few other minor mods. The other bikes in the Raptor family, like the Raptor 1000, V Raptor 1000, Xtra Raptor 1000 and V Raptor 650, have all been discontinued, leaving the standard Raptor 650 to beat the Raptor drum all by itself.

Not that it has any problem doing that; indeed the positive adjectives begin even before you’ve hopped on the thing.

Sitting in the drive, the bike’s lustrous paint seems so deep it fairly glows with radiance, while a closer inspection reveals a nicely welded trellis Frame: , beautiful brackets and quality fittings throughout. This is certainly one bella signorina.

But if you fell into the trap of thinking Italian bikes were all form and no function, think again. To an extent this may have been the case in Year: s gone by, but today the sentiment simply doesn’t hold true, and the Raptor 650 is a perfect case in point.

NOT SO SQUEEZY
At 6’2″ there are plenty of bikes around that are simply too small to accommodate me comfortably, and by nature I thought that this mid-size naked would be quite a squeeze.

But straddling the bike it felt okay. Of course my feet were flat on the ground, but that 770mm seat height didn’t feel too short, and after actually riding off down the road I was pleasantly surprised to find that I wasn’t the proverbial giraffe on rollerskates I thought I might have been.

Throw in a firmish but supportive seat, a relatively upright ride position, acceptable legroom and a surprisingly effective bikini-fairing and screen, and after a good few hundred kilometres of traipsing around the countryside to Melbourne’s east I was still ready for more.

But my lack of aches and pains only tells half the story here, because the bigger part of me wanting to push on here was more to do with the fact that if you approach this machine with even the barest hint of enthusiasm, it’s one thoroughly addictive bike to ride.

Around town it carries out its commuter role with consummate ease. It’s light. It’s nimble. It’ll flick through gaps in the traffic with but a light dab on the ‘bars.

Its flexible V-twin powerplant offers useable power and torque pretty much right throughout its rev range, although most of the time around town you’ll end up sitting between 5000 and 7000rpm – right where that torque is at its meatiest.

A BIKE FOR ALL REASONS
Get it out on the highway, and it’ll purr along at 100km/h in sixth gear at a reasonable 4750rpm, with decent roll-on power just a twist of your wrist away.

Of course as a bare bones naked it doesn’t have any of the bells and whistles of bikes more suited to distance work, but it’ll cope with long hauls well enough – and probably a lot better than you might imagine.

But it’s when you hit the curves that the Raptor really comes into its own, swooping from side to side in a predatory manner befitting its namesake. Yep, riding this thing hard is an absolute hoot.

Its V-twin rumble stirs the blood, while its acceleration, handling and all-round performance will have adrenalin pounding through your veins.

The four-piston front Brembo stoppers are more than up to the task of arresting forward progress, while the clutch is light and precise.

The suspension is pretty basic – non-adjustable (but inverted) forks and a rear shock adjustable for preload only – but they work well, offering a good compromise between comfort and all-out sporting performance.

Admittedly it’s probably not too brilliant off-road, and if I was riding around Oz I’d probably want a bit more weather protection – but this truly is a top notch all-rounder.

I WANT ONE
The bike returned 14km per litre on this test, but the pace in the backblocks was, err, somewhat brisk, and I’d expect to see that upped by another two or three kilometres per litre as a more realistic average.

Still, with a relatively generous 17.5-litre tank, that 14km/litre would still see around 220km pass under the wheels before you need to go looking for a bowser – respectable enough for a middleWeight: streetfighter.

Downsides? Not many. The end of the sidestand rests a little high when retracted, so those with longer legs may find it a stretch to reach when they want to flick it down. Its steering lock isn’t as wide as you’d expect of a naked, and its mirrors keep you well informed of the state of your elbows. And that’s about it, without risking being called a pedant.

At $12,290 plus ORC you shouldn’t have to sell a kidney either, so to my mind the Raptor 650 has ticks in all the right boxes. Great looks, great performance, great price. With fuel prices going the way they are, half the population should be on one of these – and they’d be laughing maniacally all the way to work…

Thumbs Up
Awesome all-rounder
Laugh-out-loud performance
Sexy Italian styling
Thumbs Down
Useless mirrors
High sidestand catch
Limited (for a naked) turning circle
Cagiva, at a glance…
A fabricator of small metal components, Cagiva was founded in 1950 by Giovanni Castiglioni, but the motorcycle division was founded in 1978 by his two sons, Claudio and Gianfranco.

Located in Varese, in northern Italy.

The name is a combination of the first two letter of CAstiglioni (the surname), GIovanni (the founder’s first name) and VArese (their home and company headquarters).

Claudio bought out his brother in the mid-’90s, and Malaysian automotive giant Proton bought into the company in 2004.

After internal management quarrels at Proton, Italian investment firm Gevi SpA bought out Proton for one Euro, the deal to finalise the acquisition of the 58 per cent majority shareholding going through last February, retaining Claudio Castiglioni as company head.

International demand for new Cagivas has been high, and the marque will be previewing a whole new range of bikes at this Year: ‘s Milan Show.

Cagivas are imported into Australia through the Paul Feeney Group, and sold via its 20-strong MV Agusta dealer network. 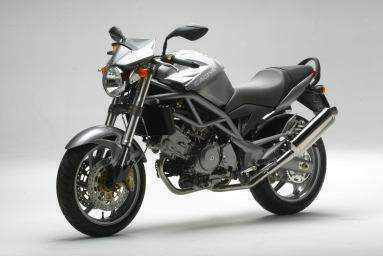