Today’s born-again Bimota adventure began thanks to the initiative, the courage and the vision of Ing. Roberto Comini, a successful and accomplished entrepreneur who is also President of the multinational company Farmavenda Spa.

As his partner in the adventure of restoring Bimota to its previous prestigious status in the motorcycle world, Ing.Comini has teamed up with Novafin, a Swiss company based in Geneva whose CEO is a great fan of Bimota, as well as thoroughly knowledgeable about motorcycles.

Mr. Gigi Bonini, a successful manager from the industry, has recently joined Bimota as the new Managing Director, and with the help of the dedicated and passionate team he has assembled, will be in charge of taking the Bimota marque back to its origins, even if the market in general, as well as the competition, has changed a great deal since it was founded back in 1973 by the team headed by Mr.Massimo Tamburini.

Bimota is fully established in all the major world markets and has recently also returned to the USA, where the first Bimota showroom has been opened in New York.

For the future Bimota is developing several different projects, including evolutionary versions of existing models which will be revealed at the appropriate time. Meanwhile, the company’s commitment and determination are at the highest levels to meet the challenging task of relaunching such a prestigious marque.

In July 2003, the reborn Bimota company, still in a start-up phase, decided to return to the marketplace with a new model which would be ‘Una Vera Bimota’ incorporating the greatest expression of technology, innovation and Made in Italy design flair. Thus was born the new Bimota DB5 Mille.

The designer of this new Bimota is Sergio Robbiano, who was already responsible for the styling of the controversial but innovative 500Vdue model.

In December 2003 Robbiano delivered the DB5 Mille design to Bimota, interpreting in a successful manner the philosophy that Bimota wanted to transmit with this bike.

Throughout 2004, a small but dedicated team has been hard at work to create the prototype revealed last September at Intermot 2004 in Munich.

Their challenge was all the more difficult thanks to the fact that the development of the new model took place at the same time as the complete re-organization of the company. Nevertheless, thanks to the diligence, devotion and passion of Bimota staff, the new DB5 Mille was duly presented at Intermot 2004.

Its success was immediate, and exceeded all expectations, with the bike’s design universally acclaimed. Such was the admiration for it that the DB5 Mille won the prestigious Motorcycle Design Association Award as the most beautiful bike of the entire show in the Supersport category.

This significant achievement spurred on the Bimota R&D team to bring the DB5 Mille to production as fast as possible, but to the highest standards, in order that the many eager customers who had expressed an interest in acquiring the bike, could have their dreams fulfilled.

Unfortunately, the winter of 2004-5 in Italy was very cold: heavy rain and snow until the end of March delayed the intensive test programme of the DB5 Mille. Nevertheless, initial test results have been immediately positive, and by building on this, after months of hard work we reached our intended aim of delivering a bike which is as satisfying to ride as it is beautiful to look at.

From the very beginning Bimota wanted to produce a bike which would be aggressive and compact, yet light-handling and enjoyable to ride. For this reason, some technical and styling choices have been made in order to be sure that the DB5 Mille would possess these qualities.

The bike is powered by a Ducati 1000 DS desmodue air-cooled Engine: , one of the most established Ducati desmo V-twin motors. Bimota’s link with Ducati extends back to 1984, and a new model powered by the desmodue Ducati V-twin Engine: is assuredly the ideal way to set Bimota’s new direction. The link between the two prestigious Italian marques has always pleased and excited enthusiasts all over the world.

The 992cc desmodue twin-spark motor is a reliable design, with exciting performance and a strong torque curve which greatly enhances the bike’s driveability.

Its great rideability perfectly matches the character of the DB5 chassis design, so that the bike as a whole becomes really enjoyable to ride.

Such an Engine: deserves to be an integral part of the model’s visual appeal, and Robbiano has therefore succeeded in combining the beauty of a complete fairing with the spectacle of the Engine: left fully in view, emphasising the mechanical element of the design as a whole, while still providing the aerodynamic qualities required by a high-performance sportbike.

Featured for the first time on any motorcycle is a trellis swing-arm constructed of steel tubing with machined lateral plates made of aircraft alloy.

The front of the bike is particularly slim thanks to the small space required by the compact air-cooled Engine: .

Near the vertically stacked headlights are located the twin air intakes through which, thanks to the internal configuration of the fairing and the front bodywork, allow cool air to be ducted to the Engine: for optimum cooling.

For the rear of the DB5, Bimota wanted the leaness of a racebike: the dual exhaust cans in anodized aluminium stand out visually, with the tiny real light mounted between the two.

The Bimota DB5 Mille is the fruit of the passion, innovation and design flair of a company that aims to return to the prestigious role it previously held in the world’s motorcycling panorama. The Bimota models of the third millennium will bring unique Italian styling, and the exclusivity of a high-tech product, to the roads of the world. 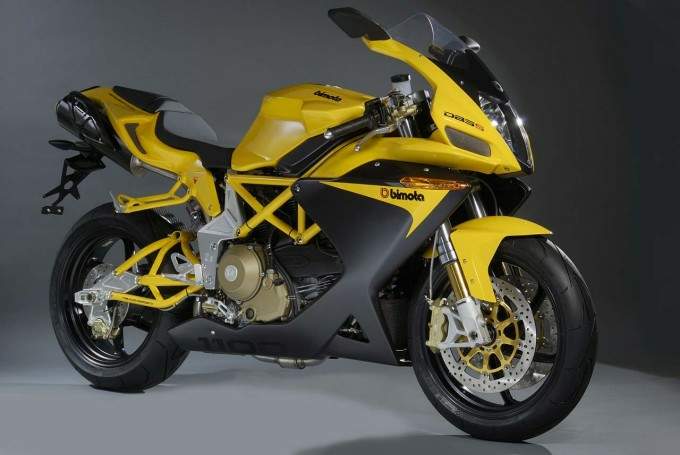