Triumph designed the America model so that it would bring a feel of the open road deep in the rider’s heart, just so it would never be changed for anything else. The ingenious manufacturer placed a parallel twin Engine: on the versatile chassis and it than individualize it by adding wide bars and forward placed footpegs, features which radically contribute at the laid back riding position. Reliable, cool looking, and efficiently pulling, the Triumph America is ready to go down the open road, right next to the other motorcycling symbols.

After it reintroduced the Bonneville back in 2000, Triumph started to use the carefully-Engine: ered 790cc parallel-twin with 360 degree firing interval on many motorcycles and so it created a larger range of products from which customers would choose.

One of those motorcycles is the Triumph Bonneville America. Launched in 2002 and featuring the Engine: on the recently revived model, but with a 270 degree firing interval, the America model was the next big hit planed by the manufacturer.

This was just a first step in Triumph’s plan as the bike was no longer referred to as being a Bonneville in 2003. Individualizing it was the plan, so it was simply designated the Triumph America.

It is strange how things worked out with two models at Triumph, the America and the Speedmaster. The second appeared as a consequence of the first and yet it had priority and received the 865cc motor starting with 2005 model Year: . The America suffered this same upgrade for 2007, together with new cast wheels, reverse cone silencers, and adjustable clutch and front brake levers. 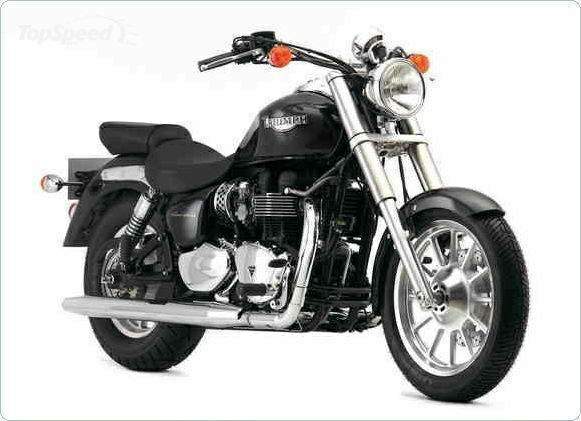