“I caught a lot of crap for it,” Ransom says about his decision to use an inline 4-cylinder instead of the industry standard V-Twin. “Everybody and their father builds V-Twins. Everyone talks about being original but, in reality, nobody was.”

He draws upon more sportbike technology incorporated in his designs. His creations use a tubular steel twin-spar Frame: . Unlike the standard chopper set up where the Frame: tubes run under the Engine: , The Revelation’s tubing runs outside the Engine: and connects directly to the Frame: ‘s main spars.

Ransom’s styling also includes a hand-formed aluminum body. He chose aluminum for its malleability and because it keeps the Weight: of his bikes down without sacrificing the durability needed for serious street riding. Most of his bikes weigh in the low 400-pound range (with the exception of a turbo ‘Busa he’s got in the works that’s around 480 pounds).

Ransom’s body design also couples form with function. The tank and fairings pop off to make the bike easily serviceable. He chose steel for the fenders so rocks kicked up by the soft rubber of a hot tire won’t ding the fenders like they would if they were made from aluminum – a smart choice, because nobody wants their custom creation to look short of flawless.

One of the most noticeable traits of the bike is the fatty back tire. The chromed 18 x 10.5-inch custom Wrath rim teams with a gnarly 300mm Avon Venom tire that complements the ground-skirting Frame: of the Revelation. It keeps the power right where it needs to be – between your legs.

“It takes the power and uses it,” Ransom notes. “With a bone-stock Engine: , the Revelation runs in the high 9.90s in the quarter mile.”

Pictures of Ransom riding the Revelation display how the bike and rider share a symbiotic relationship. The bike is tailored like a suit. Ransom takes into account numerous variables, from a rider’s height and Weight: to their leg and arm length. He positions the handlebars according to a rider’s preference based on their measurements to maximize riding comfort and positions the saddle based on the seat-versus-peg relationship.

“Some people questioned how I rode with what looks like a short distance between the seat and pegs, but I can go a couple hundred miles easy, comfortably,” Ransom says.

The saddle is built directly into the Frame: , but Ransom assures us the bike rides exceptionally well for a rigid. He recommends dropping the air pressure slightly in the rear tire to reduce the harshness.

The liquid-cooled, six-speed custom includes burly Mid USA forks and polished stainless steel exhaust that complements the finished product. The blend of sportbike technology and custom styling lends to Ransom’s claim as “the Ferrari of custom bikes.” The combination of speed and horsepower from the high-performance sportbike Engine: and the exotic look of the body lend credence to that assessment.

If you’re looking to buy one, base price runs around $50Gs but varies depending on the options. Building time takes approximately 8 to 10 months. You’ll also want to plan a trip to Jersey at least once for the bike to be properly fitted. Check out www.ransombikes.com or www.myspace.com/ransombikes for more information on Ransom Motorsports.

Options include choice of body style (hard-tail, soft-tail, gothic, exotic, drag race, sleek and flowing, or let his team create an artistic masterpiece for you), paint color and graphic/airbrush schemes administered by the expertise of Jim Caruso, who painted the original. Ransom also offers a selection of rear tire sizes (300 or 330mm), wheel design, hand controls, Engine: sizes (he’s currently working with both a ’05 GSX-R1000 and the 250-hp turbo ‘Busa mentioned previously) and other performance upgrades.

Despite being fairly new to the custom bike building scene, Wayne Ransom creates one mean ride. A quick MotoUSA Q&A provides a closer look at the man behind the bike.

MotoUSA: What inspired you to build custom bikes?

Wayne Ransom: “I had been dealing in the custom sportbikes biz for about three Year: s and I wasn’t seeing anything new, mostly just bolt-on stuff. Business was slow and I was worried about my future, so I prayed to God to show me what to do. That’s when He gave me ‘The Revelation’ as a vision. So I built what I had seen.”

MotoUSA: Where did you learn the trade?

WR: “From the school of hard knocks. I knew how to weld and started collecting tools. I was always good at geometry and math, so with His help it just all came together.”

MotoUSA: Staying open is challenging in the custom bike world. What plans do you have that’s going to keep your business on top of the game?

WR: “I don’t sell out. I don’t just build to build, I build for my bikes to perform. My bikes put the horsepower on the ground, where it belongs. I stay strict to my business and moral values. This business can be an evil industry. Everybody wants to be an outlaw – it’s the whole pop culture thing, sex, drugs and rock ‘n’ roll. I want to promote the business in a more positive light, something kids can look up to.” 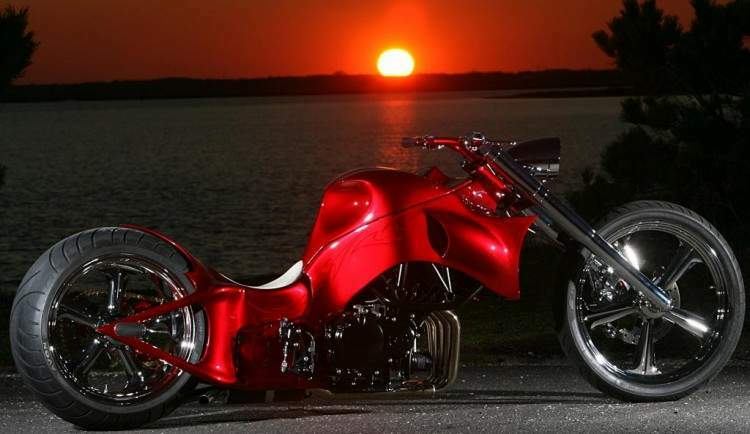