By 2007, the Burgman must meet Euro 3 environmental protection standards and so Suzuki Engine: ers have taken advantage of this opportunity to improve a few important aspects such as the braking, roadholding or comfort, while remaining faithful to the spirit of the present model.

The price of the new Burgman 125 therefore remains particularly competitive in the face of the offering by Taiwanese or Korean manufacturers. Remarkable performance for this scooter produced in Gijon, Spain.

Beefier
The body of this new Burgman 125 has become clearly more voluminous at the front, which gives it a more compact and squat appearance than the older version.

The disproportion between a very broad rear (because of the size of the storage space) and a very slim front has therefore ceased to exist, benefiting the overall harmony.

Also the two front lights are now separate (low beam on the left / high beam on the right) and no longer blind oncoming road users.

As easy to ride as ever, the new Burgman 125 is a good scooter for two-wheeler beginners.
© Suzuki
Still as easy to drive
Like its predecessor, this new Burgman 125 can be advised without any hesitation for beginners, because it is so easy to handle and manipulate in jams. It is not too voluminous and its seat is slightly higher than before, which makes it easier for women drivers to ride and improves traffic vision. Nor is it difficult to place both feet flat on the ground thanks to the large cutaway sections in the footboard. At the same time, big riders are better catered for thanks to the new design of the seat and the better adapted position of the rider’s backrest (not adjustable).
The new 13 inch diameter front wheel (12 inch on the present model) does not weigh down at all on the steering, which remains light and natural at low speed.

Unchanged Frame: , improved suspensions
The new Burgman’s Frame: remains strictly identical to that of the old version, but the front wheel has risen from 12 to 13 inches diameter and the suspensions are improved. The result is a more clear-cut steering Capacity: , that suffers less from the Frame: ‘s relative lack of rigidity (compared with a Piaggio X8 for instance). Similarly, on braking, the fork (+ 3 mm in diameter) is better able to stand up to high decelerations.
On the other hand, the shock absorbers remain firm, which penalises above all big riders whose riding position on the Burgman is hard on the bottom of their backs. With a passenger, comfort improves for the team.

One of the major elements of progress of the Burgman 125 2007 resides in the adoption of combined braking. Pulling on the left lever activates one of the three pistons of the front caliper, at the same time as the rear caliper. As the front disc is bigger moreover, this braking is clearly more powerful than before while being perfectly adjustable. The most demanding of riders will simply regret a somewhat hard feeling on the levers. 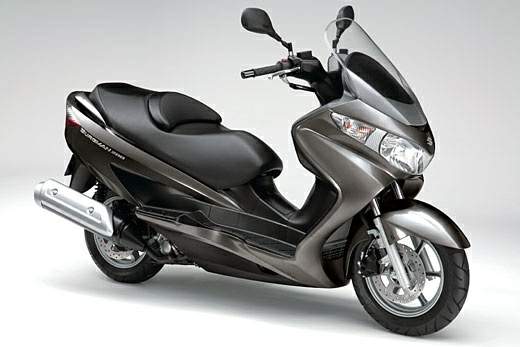