He now designs customs to live up to his own taste, specifications and standards, and try financing his projects through the sales of his parts line. “ExperiMental” (notice the capital M in the name) the bike he built for a TV episode of Discovery channel Biker Build-Off, is a good example of what a great builder can do when he has no limitations placed front of him. “ExperiMental” is a two-stroke BRC 250cc super kart motor placed in a heavily modified Honda dirt bike Frame: . It’s an Aprilia Rotax designed Tandem-Twin, two cylinders, one in front of the other, and two crankshafts geared together. It features an electric water pump, ceramic composite brakes, and even carbon fiber wheels. It was built to dual out against Matt Hotch on the salt at the legendary Bonneville Speedway. On this unusual machine, Goldammer was able to wind out “ExperiMental” to 128.774 mph through the timed mile, besting rival on the salt and fellow builder Matt Hotch on his beautiful custom Vincent (Hotch’s bike was clocked out at 99.728 mph, which is also exceptional). ExperiMental is probably the most efficient dirt bike ever built. Roger Goldammer Cycle Works. 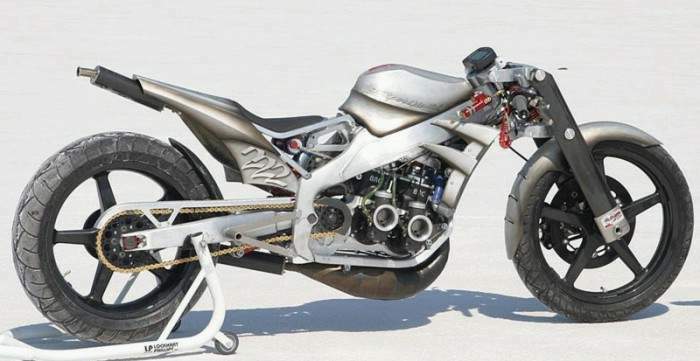