Goldammer has always had a love for all types of motorcycles but especially British bikes and the shining example on these pages is Goldammer’s way of incorporating traditional design with modern concepts and technology. His very first build was a 1968 BSA Lightning that came to him as a basket case. It’s because of his love of British steel, or more accurately, the Norton Manx, that Nortorious was created. “I consider the Norton Manx as the blueprint to today’s sport bikes as we know them today. The geometry, power-to-Weight: ratio and balance, they were just a marvelous little bike. The bikes were made for racing and they still dominate vintage racing. I also have a fondness for single cylinders from riding dirt bikes more than anything else”. It’s obvious this bike takes styling cues from the Norton Manx, albeit with a little more aggressive stance.

For many Year: s Goldammer has shunned conformity. He prefers to do things his way, in fact, he is influenced by what he likes of course, but possibly even more so of what he doesn’t like. Goldammer says, “A lot of people today go for the shock factor – longer, heavier, lower, wider, crazier, pointier, using treadmills for belt drives or tires that are a foot and a half wide. When I see that, I go the other way. This bike is the ‘alter-ego’ of those bikes”.

Goldammer has never backed down from a challenge and it’s a good thing because when everyone else is zigging and you want to zag, you have to be creative. There were many trials and tribulations going on with this bike that remain unknown until he starts to explain them. Goldammer learned a lot from his second World Championship winning bike, ‘Trouble’, which was his first single-cylinder experiment. Just to clarify, or confuse, the Engine: is actually a single-cylinder V-twin. In the case of ‘Trouble’, Goldammer first lopped off the rear cylinder and mounted in its place a belt-driven Supercharger; fuel was fed by a carburetor.

Goldammer has since advanced past the rudimentary world of carburetors to the unknown world of a closed-loop fuel injection system on a supercharged V-twin single-cylinder. While the differences are huge between carbureted and fuel injection, some very valuable lessons were learned. One such lesson was the huge gulps of air that a big single cylinder needs, especially once the boost ‘kicks in’. Although ‘Trouble’ ran fine with big horsepower, it didn’t have much of an air plenum or reserve air chamber. In the case of ‘Nortorious’, he knew he needed to make a huge change in the air/fuel intake design.

To accomplish this, Goldammer once again lopped off the rear cylinder from the Merch cases but not the rear cylinder head. In order to have enough of an air plenum, he chose to have the intake on the front of the Engine: and still mount his supercharger on the rear. That means fitting the rear cylinder head on the massive front cylinder and running his ductwork over the Engine: and under the fuel tank. The master builder has a long history of Engine: building and is always looking for a challenge, so in order for the reversed valves to work, he made and indexed his own camshaft.

Another hurdle for Goldammer to overcome was the fuel injection. He said, “A stock Harley runs a 38 pound fuel injector but I used a performance injector that runs at 47 pounds. When I had it on the dyno, I found it was running lean at 5000 rpm. That’s because boost from the Rotrex Supercharger counteracts fuel pressure so I had a 69 pound injector specially made for this application”. Goldammer used a Thunder Heart ECM and also has Dobec ECM under the hood that kicks in when the Engine: is under boost. Once Goldammer finished the programming, his V-twin 965 cc single cylinder produces an amazing 83 horsepower. “I could probably get a bit more out of it but I’m happy with that, considering a stock Twin Cam gets around 63 horsepower with two cylinders”.

Notice too, that the Engine: is rotated back 15 degrees and the 6-speed transmission is closer to the Engine: to allow for a shorter Frame: and keeping the traditional vertical British single look. The Frame: was basically built around the Engine: to keep it compact.

The massive front and rear brake drums are hand-made by the master craftsman and do an impressive job of adding to the look of a vintage British racer. Inside those drums, however, are modern discs and calipers.

The fuel tanks and fenders are hand pounded and welded which is nothing strange in a custom bike, but what sets these body pieces apart from the usual is that they are not painted, merely clear coated. With no bondo hiding imperfections, no ripples and no sign of welding, these body panels are truly a work of art in themselves.

Goldammer, being a true craftsman, but also being very practical, does not show one of his creations until it is perfect. To lay testament to this, Goldammer threw a leg over the seat, turned on the ignition and hit the starter button. No rigmarole, no special starting rituals, no praying to the custom gods. The instant the Engine: roared to life, Goldammer toed the shift lever into first and took off without any fanfare. The Engine: has a unique sound, unlike anything I have ever heard before. ‘Nortorious’ is a very rideable motorcycle as was evident when Goldammer tore up a dirt horseracing track at the Olds Fairgrounds in Alberta during the Canadian Championship of Bike Building. Goldammer won the Canadian Championship and will be on his way to Sturgis this Year: as Canada’s entry along with last Year: ‘s winner, Cycle Boyz Customs.

The craftsmanship is top-notch in all of his bikes but the technology in each one far exceeds his previous build. Goldammer, proud of his ‘different from the norm’ creation said, “The neat part for me is this bike is being featured in numerous publications, all the way from The Horse to The Robb Report”. That is quite an achievement for one motorcycle. 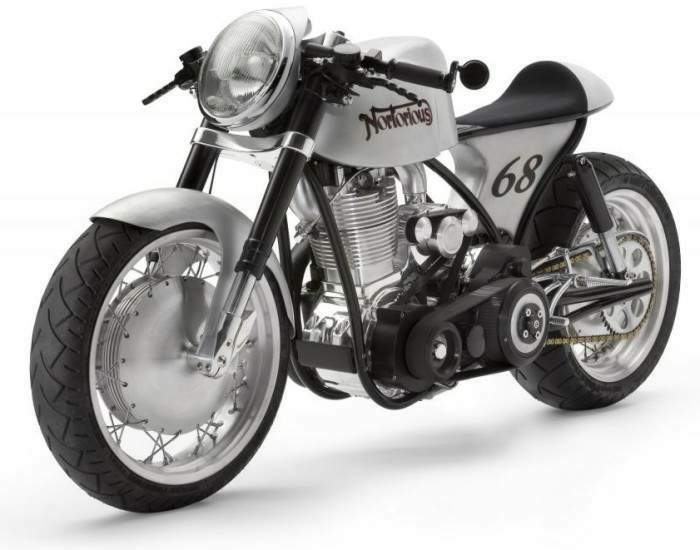