Motociclismo recently had the opportunity to ride the bike at the Monza circuit, in Italy, and here are some excerpts from what they have to say about the BB1:

When you see the Millepercento BB1 for the first time, the first thing you’re likely to notice is the radiator, apart from which the bike looks quite similar to the standard Moto Guzzi Griso 1100. The radiator is masked by strips of carbonfibre and doesn’t harm the aesthetics at all.

The BB1’s 1420cc liquid-cooled Engine: , which has two spark plugs per cylinder and titanium valves, is a perfect fit for the stock Moto Guzzi chassis, which remains unchanged. The increase in power, over the standard Griso 1100, is incredible. With 117bhp in place of the stock bike’s 77bhp, the BB1’s 1420cc Engine: is about 50% more powerful than the air-cooled Guzzi mill.

It’s long, low and heavy, but the BB1 has its own charm. Probably…

The BB1 feels roomier than the stock bike, and is more stable at higher speeds. The new fuel injection system made cold starts a bit difficult, and this needs to be changed. On the move, the bike feels heavy, though its low centre of gravity keeps things manageable.

Power delivery is not really linear, or very consistent – the throttle is more like an on/off switch. Even when you try to accelerate gently, the power comes in all at once – the amount of power that goes to the rear wheel is just not proportional to how much you turn the throttle. This makes it difficult to control the bike, especially in slower corners, where it becomes impossible to feed in the power gradually.

On long straights and fast corners, however, the power delivery seems impressive. The BB1 is stable at high speeds, and though turn-in isn’t very quick, once you pick a line through a corner, the bike pretty much sticks to it. The brakes feel excellent, very powerful. And finally, yes, the bike still vibrates, though no more than the standard Griso.

The Millepercento BB1 will be available in Moto Guzzi dealerships from February 2009 onwards, at a price of around US$32,000. 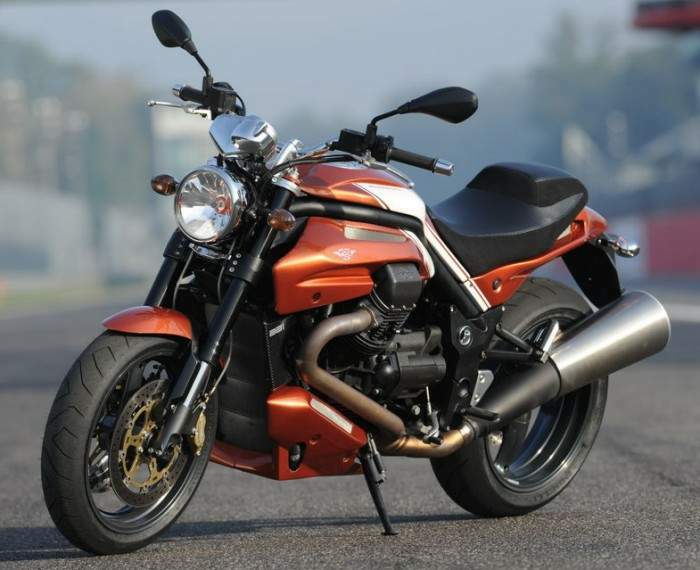