Make ModelKalex AV1
Engine: Rotax V990R 60°-V
Capacity: 997.6
Max Power: 102 KW @ 9500 rpm
Max Torque: 107 Nm @ 7750 rpm
Reviewkalex-moto.de
The KAlex AV1 was almost completely designed in the computer, the kind of thing you would expect from a high end racing team in MotoGP, not something for a much less prestigious series like Sound of Thunder but very indicative of the kinds of folks racing can attract.
They chose the V-twin Engine: from an Aprilia RSV-R which in standard form makes 127 horsepower. Their plans are for about 160 horsepower in racing trim. The body is all carbon fiber covering a steel trellis Frame: . It weighs 363 pounds ready to race, 341 pounds dry.
The bike took thousands of hours to design, build and test but during testing, a crash destroyed the bike completely, well, that and the fire, but, since the whole thing was in the computer, it took only 6 weeks to build another one. Pretty handy having those files. Of course, they can build one for you, too, but at about 80,000 Euros, ($116,000)
Source Thekneeslider.com 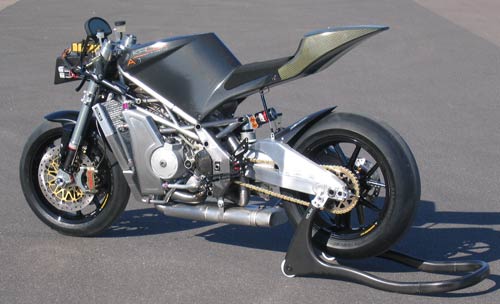