Yee-aah-hooooo-weeeeee! This is serious and proper fun! There’s nothing wrong with in-your-helmet shouting every now and then, but this time the whole situation was kinda weird.
The location? The infamous Sodom-Arad road, regarded by local squids as Israel’s best bit of winding tarmac, climbing up from earth’s lowest point up to the Judea desert’s high plains. The context? Trusting girlfriend and I plus a hefty duffel bag strapped to the tank while touring Israel. The tool? A very unlikely fellow: Hyosung’s GT650R.

Got to admit that I wasn’t quite expecting this unknown, entry-level type of scoot to be this satisfying on such a demanding road and yet, the GT650R was handling the devilish bends like a proper small sport-tourer would.

And now for something completely different: A Korean bike with an Israeli backdrop, the GT650 overlooks the holy land of Jerusalem. The golden dome is the el-Aqsa, or “Dome of the rock.”

As I reach the town of Arad, at the top of the plains overlooking the Dead Sea, I kindly ask my girlfriend to take a really long coffee break while I treat myself to a solo run up and down the dammed road. The place has some reputation: small memorials where squids lost their lives line the road in the risky bits. And yet, the GT650R is not fazed, even when I turn up the heat some more. So then, are the Koreans really getting it?

Our first steps together have not been so sweet, though. I have seen Hyosungs before in shows and such, but when I finally found myself in front of one at the Israeli importer’s office rather than under the spotlights, the overall impression was kind of so-so. The GT650R, the sporty full-dressed brother to the 650 Comet GT street standard tested at MO, has got quite a presence with its red monochrome full gown, but when you get up close the overall detailing and finishing is not that convincing. Fitment of body panels, the quality of the clocks panel, a slightly dumb looking top triple clamp, the switch gear – it all adds up to a feeling of “Nice but not quite there.”

A bit of a shame really as under the not-so-solid-looking surface there’s plenty of solid metal. The GT650R’s V-Twin power unit has its pots positioned at 90 degrees, sports liquid cooling, four valve DOHC heads and generally shows that Suzuki has indeed been mentoring the Korean set-up for a while. The family ties with the SV650 are indeed tight, even if those twin mills are certainly not identical. This Year: sees the introduction of fuel injection to the 650 motor, and power-wise, at least on paper, it’s nearly on even ground with the trusty SV650 and Kawasaki’s 650 parallel-Twins.

Not a thing of great beauty, but not an offending sight, either. Black Frame: tubes are the best bit functionality speaking. Note the adjustable footpegs.

The Frame: , though not as impressive as the SV’s alloy job, is a sturdy looking steel twin-spar affair where each spar is actually constructed from twin tubes with plenty of gusseting joints. Suspension is pretty much up to date, with an adjustable inverted fork up front, progressively linked mono on the rear, while the brakes are not last-generation stuff: floating twin-piston calipers, a similar setup to its Kawi and Suzi peers. On paper it’s got the right tech cards to play, it’s only that plenty of tiny details entail the bike with a mid-’90s rather than late-2000’s aura.

Moving on to the riding bit, our first miles together while city riding do not flow so smoothly. I do find the GT650R a nice-fitting, small-to-medium-sized bike. The clip-ons might sit under the triple clamp, but that doesn’t mean that the riding position is full repli-racer. It’s actually much more sport tourer than pure sport in nature – pretty comfortable for me at least.

There are quite few flies in the ointment, though. Notchy gear shifting and a slight off-idle hesitation make urban dwelling slightly more painful than it needs to be. Clutch pull could be lighter, and disengagement better, too.

See what we mean by being not quite there? The upper fork clamp is big enough to play a football match on.

At the end of our first day together I pulled a 10mm spanner in order to rotate the clutch and brake levers down somewhat. With the master cylinder positioned a bit lower to fit my humanoid dimensions, the tip of its banjo bolt started to foul the fairing as I rotated the bars left to right. That said, I must admit that after a week of riding the GT650R, the urban manners of the thing improved. Looks like the gear shifting loosened up somewhat and made city riding much more enjoyable.

The GT650R felt much better outside city limits. As we head west towards Jerusalem, hitting some less traveled mountain roads, the sport-tour side of the Hyosung starts to show if not downright shine. The Engine: has a satisfying pull from 3000 to 7500 rpm, and in semi-fast touring mood, say through 50-70-mph bends, it supplies a nice drive. It might not feel as smooth and buttery as the SV’s or as plain revvy as Kawasaki’s Ninja 650R, as a certain harshness is felt at times through bars and pegs.

On the straight bits, the not-so-low windscreen bubble deflects the air pretty well and lets me trot at 90 quite undisturbed. Soon enough I find that the real ace up the GT650R’s sleeve comes out when things get really twisty. The GT turns out to be really flickable and tracks true when put down low on its side. Though its suspension might not be the most sophisticated on earth, it does nothing that requires me to shut off or slow down despite being loaded with a rider, passenger and duffel bag.

The GT650R is a competent handler, even with its rudimentary suspension and porky Weight: .

Color-coordinated bungee cords are all the rage. Check out Yossef’s eBay store.

“The asymmetrical mounting of the silencer will cause the Hyosung to tip right if left unattended,” Yossef notes.

With warm tires (even if those are dated Battlax BT56s) my confidence in the sporty Korean grows, and by now my boots are skimming the tarmac here and there. Whoever was in charge of suspension settings at the factory surely went for a slightly stiff but controlled approach, which is good, even if every now and then, mainly over bumpy stuff, the front would do something funny. At one stop I did try to fiddle with the adjusters in the fork’s caps, but weirdly enough, it didn’t seem to make any difference in damping.

No complaints about the Frame: , though, as the steel trellis affair feels sturdy and stiff. The overall solid feeling carries a price, as the GT650R is not exactly a lightWeight: . When really pushing it through very fast direction changes, the above average lard factor make itself present. Claimed Weight: is 441 pounds.

As we stop for a longer coffee break, Lorella, my girlfriend, seems to be quite happy with her time on the back. The stepped seat might not look inviting, but yet Lorella rated comfort quite highly – and she’s been on the back of a bike or two during the last few Year: s. An aluminum grab handle is appreciated.

As we stop for an overnight stay in Jerusalem, after quite a few hours of riding on the surrounding mountains, I feel pretty fresh, too. More important, the GT650R has made up for its initial so-so impression with a nice display of sporty manners.

For the next two days the Hyosung gets acquainted with the most important sacred sites for three of the world’s religions and generally behaves like a good Korean kid. By now I have gotten used to cracking the throttle just that little bit more in standing starts so the persistent low-speed hesitation has become less of an issue.

We proceed from there further west towards the Dead Sea and the road that takes us to the lowest point on earth is quite fast and sweeping. As I crack on, I do discover that as useful as the 650 V-Twin is in the mid-range, it’s not that convincing higher up the rev range. When MO dynoed the similar-Engine: d GT650 Comet, we found that its 66.7 horsepower at the rear wheel is close to Granddaddy SV650’s output, but numbers don’t tell the whole story. The GT650R can be stretched to 9000 rpm and then some, but just doesn’t feel like it enjoys this said stretch through its bars and footpegs.

As a Bedouin driver pulls out un-expectedly onto the road in front of us, seemingly out nowhere, I also make a mental note that the brakes are not something to write home about, either. Feel is okay-ish, but we’d appreciate more outright power, please.

We spend a day in the area, and after taking a bath in the extremely salty thermal waters and visiting the historic site of Masada, we are ready to ride back to Tel-Aviv.

It is on this last and furious leg that the GT650R leaves me feeling that there’s a real and proper bike down there. A few more days aboard the GT650R confirmed my impressions: A pretty competent sport tourer that really handles and could be an interesting entry-level street bike.

Alas, the GT650R has to fight it out with some stiff competition aimed at exactly the same market niche, namely the Suzuki and Kawasaki 650 Twins. Even if on paper the spec sheet puts the GT650R on level ground with them, the reality is that the GT650R still needs to step up its game by a fair bit or be much more attractive price-wise.

It’s no Desmosedici RR in terms of desirability, but the GT650R’s relatively modest MSRP should appeal to some budget-conscious riders.

If Hyosung will manage to endow their wares with more of a quality feel in terms of finish, materials, detailing and fine tuning, they could really make a splash. As it is, the look and feel is too mid-’90s when compared to its third-millennium counterparts, especially in this dressed, full-blown sports version.

Need further proof that Hyosung are not that far off the mark? At the 2006 Milan show, Italjet showed two proposals for “Dressed in Italy” versions built around the basic mechanics of the Korean 650s, and the result was finger-licking good.

Considering how Korean companies like Samsung and LG stepped up their game to become head-on competitors with the best Japan’s got to offer, don’t be surprised if the same happens with Hyosung, sooner than you might think. 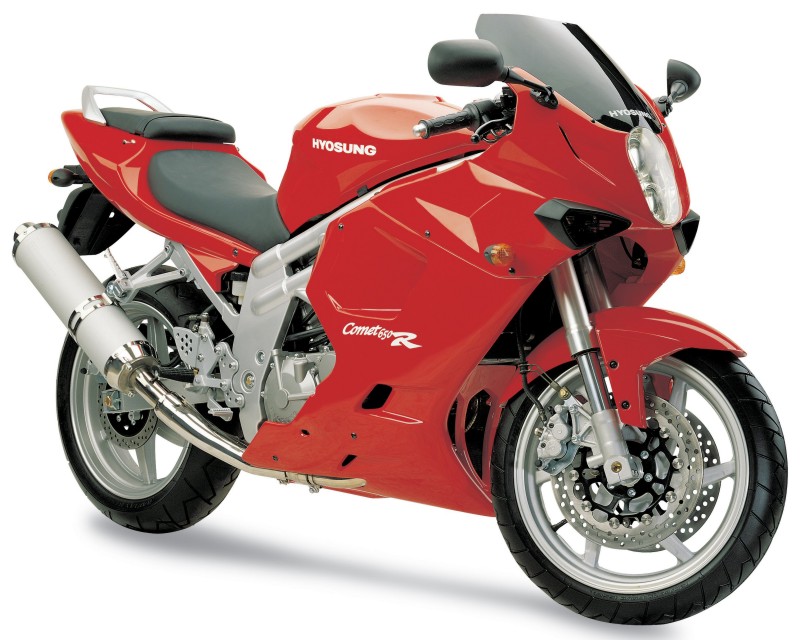