One of the longest living models in Husqvarna’s lineup, the WR 250 was first produced in 1969 and followed a great success all through the 70s as it was a cheap and easy to live with machine characterized through a two-stroke Engine: , good suspensions and drum brakes, kind of like all the bikes of the time, but what you will notice in the pictures are the color schemes. This is testimony of the fact that Husqvarna comes back to its roots.

Things evolved together with the arrival of the 1980s and the bike would have looked a little more up to date thanks to its square headlight and the addition of as much plastic as possible. It so ended up looking like a trail ride that had stepped-up to the challenge and boy it did! The 80s had a great impact on the Husqvarna name and the WR had much to do with that. With the Year: s passing by, the manufacturer oriented on keeping the Weight: down so they removed the unneeded plastic, making the bike look a little more athletic.

The mechanics had evolved a lot so the Engine: was living the days of glory of the two-stroke generation.

The early 1990s gave a green light to stylistic and mechanical upgrade so you will identify a 1992 model and say “it’s a husky” with no doubts. Disc brakes were the key and the Engine: revved higher than ever before. It is also the Year: when they went for the Blue and Yellow color schemes which were changed all through the 90s, with their reintroduction together with the new millennium.

Until 2006, minor changes were done to the bike as the manufacturer planned a major revamp for 2007 model Year: . Riders could now enjoy a new seat, new tank and new panels and the red and white cover was added. Fitted with new instrumentation and redesigned handlebars, the WR 250 was a totally new and yet filled with history motorcycle. 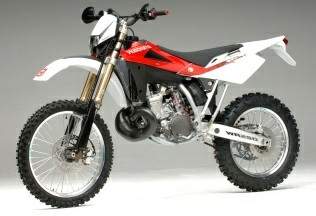