Husqvarna first introduces the TE 250 in 2002 model Year: as an Enduro / off-road model participating in the race to celebrity and being powered by a 249.5cc four-stroke single-cylinder Engine: featuring four valves per cylinder and a bore and stroke of 76 x 55 mm. So apart from the carburetor, there isn’t much difference compared to the model reviewed today. There was also an E-starter fitted on the bike from the first day of production and that gets it even closer to what we are facing today.

But what doesn’t do that is the five-speed gearbox, the 220mm Rear Brakes: diameter and the 2.11 gallons tank that saw their way on the bike for 2002 model Year: .

In its first Year: s of production, the color combination was Blue and Yellow.

After launching the TE 250, Husqvarna had planned the first important revision for 2005 when the bike received a Mikuni TMR 36 mm carburetor, digital ignition and dry sump with two oil pump rotor and cartridge filter to improve the Engine: ’s performance while the clutch was now wet, multiplate type, hydraulic.

Chassis improvements also made out of the TE 250 a top notch product. The bumps were by now absorbed by an upside-down telescopic hydraulic adjustable fork and progressive soft dump with hydraulic adjustable single shock absorber. Fuel tank got a bit smaller (2.03 gallons).

For 2006, the Husky TE 250 became brighter, smarter and a bit faster and smoother. The colors weren’t so dark, but what’s most important are the mechanics. Even though the Engine: remained the same, it was now mated to a six-speed gearbox. Front Suspension: was provided by Marzocchi and Rear Suspension: by Sachs. This is also the Year: when the rear disc brake diameter increased to 240mm.

By 2007, the Year: when BMW bought Husqvarna, the TE 250 was approaching the Red/White color scheme and the manufacturer tried to improve the bike’s previous additions with new features such as the new automatic decompression system added to the kick starter. The suspensions were recalibrated and the brakes were now supplied by Brembo.

Comparing the Husky with the Japanese off-road motorcycles is no mistake as this bike was created to compete with such machines and it does it proudly. 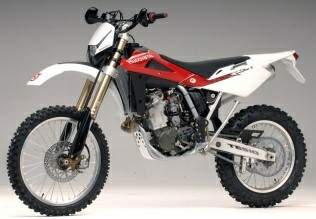