The King of the big bore power producers for most of the ’90s is dead. Husqvarna’s TE610 has gone and in its place is the TE570. An all new model? Well there are two ways of looking at that.
Truth be told, the 610 was never a 610, it was always a 576, but in Year: s gone by the rule was that if it wasn’t a 600, it wasn’t in the running. This concept began to change with the arrival of the WR400, began to crumble with the success of the KTM520 and is about to smashed to dust by the arrival of a crop of extremely quick 250cc fourstrokes. At the end of the Year: 2000, and just a couple of Year: s since they reigned supreme, 600s have become something of a dinosaur.

It’s all about perception. These days 600s are seen as big and heavy, whether they are or not. With modern technology there is no need for excessive cubes, and with 400s pumping out gobs of power and shedding kilos at an astounding rate, the majority of riders in the adventure enduro market are taking a long hard look at what size their next bike sould be.
Obviously it was time for the Husky mob to come clean and admit that they’d been cheating by using a mere 570 to beat up on all the muscular big sixes. While most of the others have been making a fuss about finally producing mid-120kg four-stroke powerhouses, Husky has had to make do with what it had, because it had been there all along.

Sidetrack has never been a huge fan of the 610. Yeah, wi liked it well enough but the TE41 0 was always more the favourite because it felt lighter and quicker to toss around. It came as something of a shock then to ride the 570 200 metres and fall deeply and passionately in love.
There’s a certain something about a truly good bike that leaps out and grabs you instantly. A well-sorted feel, the wa everything fits to your body, the response to the slightest movement of the right hand. Few bikes can provide an instant sense of depraved lust for speed and handling; the 570 does.
To explain this it is probably important to point out that despite what seem like detail changes from last Year: to this the 2001 TE570 feels like a completely new bike. Take the clutch for instance. It’s lighter than before, and way lighter than it was just two Year: s ago. Better still, it disengages ver cleanly and we never had a problem finding neutral after pulling to a halt. The take-up is strong and the feel excellen
But the reason for the new over-all feel to the bike has to be the crank. The big, even ponderous sensation of all that mass spinning under the tank has gone. The reduction of inertia has not only allowed the Engine: to rev quicker, but th gyroscopic effect of the crank has been reduced as well, an while it may sound esoteric you can actually feel it. The Engine: has a lighter, snappier feel to it and this change of mood has permeated throughout the bike.
Of course some things don’t change. The 570 still makes awesome power, delivered in a mind-bending rush. The response is sharper, but the delivery is smoother and there is even less need to use revs to cover ground. The TE grunts its way along tight single-tracks with little need for the clutch or gear lever. Pick a gear and leave it there; the 570 will pull it. Out in the open though you can let the revs not so much build as slam blocks of power one on top of the other until the speedo gives up in despair and you’re hard on the brakes for the next turn.
This is the sort stuff the 610 was legendary for and the 570 will not diminish the tough-guy reputation one single bit. The new delivery though is much more user-friendly, especially in the rough where too much throttle can quickly lead to drama. On top of all this the 570 produces less vibration, and in fact with its easy starting it’s down-right civilised.

The 570 is the sort of bike you go looking for trouble on. The easy line is never the one because the bike is begging to strut its stuff. You go searching for long rocky hills, sharp ledges on slippery trails and berms to nail on some snotty trail way back in the scrub. You can’t help but push the suspension because the fact is that it’ll take it.
The 2001 suspension package is the softest/firmest on any Husky we’ve ridden. It is wonderfully plush over rock yet incredibly firm in the final reaches of the stroke after the hits have come hard. We’d ridden a different bike in the same spot a month before – and a very good bike at that – and the change in the perception of the riding was amazing. Things we’d been wary of like sharply raised tree roots became a breeze, challenges like steep climbs over rock steps turned to fun, and just to push things a bit a snotty rocky trail we’d previously avoided completely was tackled with ease.
Confidence. That’s the word. The 570 is extremely surefooted and when the wheels are tracking every inch of the way then the rider can stop worrying and enjoy the trip.
The new linkage ratios have paid off with a progressive action. The wheel keeps strong contact with the ground in the messy stuff enabling the Rear Tire: : to find drive almost anywhere. Going from wet clay to damp rock on steep up-hills hardly produced a side-slip, and with a little momentum the Husky clambered over angled wet tree roots like a true champion. Yet when the bike was tossed into the air it landed with superb grace, feeling as firm as a motocrosser. It also has the happy knack of using all its suspension travel without feeling like a sponge.

So we’ve got a great Engine: and a brilliant suspension package, but that’s nothing when compared to the improvement in the steering. Remember that the rake is steeper, the steering head is pushed forward and the triple clamp offset has been reduced. What have we got? A whole new way for a big bore Husky to go through a turn.
The 570 loves a berm. Slide it in under brakes, feed on the power as the wheels lock into the rut and watch out, she’s gunna turn. No 610 has ever gone through a corner like this and it’s so good that you have to keep hitting berm after berm to make sure the first couple weren’t a fluke.
The Husky’s ability to hold a line is exceptional. Even on flat corners the front will bite and drive, and hitting something mid-turn won’t upset either end. High speed or low speed, the story’s the same and the rider quickly finds he’s getting to the end of the trail very much sooner than he did before.
But the quicker steering hasn’t produced a trade-off on straight line stability. The 610’s rock-solid attitude at speed still lurks in the 570, enabling it to be hammered down rough trails without a qualm in the world. As mentioned previously, the rider goes looking for the hard line on bad hills just to see if the bike will take it. It does, and without drama!
Throughout the test there wasn’t a single time that the Husky didn’t feel 100% under control, pilot error aside of course.

Brakes
No dramas here either with the 570 sporting the usual excellent Brembo set-up. The shroud over the rear master cylinder is a tidy thing and the rear adjustment system does work better than the previous one.

We like the new decompression lever which is separate from the clutch, making it easier to reach and use.
Access to the sparkplug is unbelievable in this day and age. All bikes should be like this.
The new killswitch is better than the old system – short story … A few Year: s back a test 610 managed to fall over. It was picked up, restarted, but then cut out every time the clutch was pulled in. It took a minute or two to work out that the left switch block had rotated and the lever was hitting the killswitch. We like the new, simpler system.
We didn’t like having to give it back before the Engine: had fully loosened up. Husky importer Hans Appelgren has promised us another run once the ks are up – we figure it’ll go like a cut snake then.

The 570 offers a whole lot more than a name and graphics change. It feels like a ground-up new bike, and it handles like one too. Interestingly, when Darryl King came out to ride the last Thumper Nats round this Year: he was keen to ride the production 2001 TC570 instead of the factory bike he had with him. Unfortunately the proddy didn’t arrive in time, but it says something when a guy like that wants a production model over a factory special. And the latest news is that Stefan Merriman has just won the Six Days on what was basically a stock standard 2001 TE410. These things are that good.
It’s more than a new face, it’s a whole new outlook. Give one a try, but have the money ready because once the 570 gets its teeth into a bloke, there is no escape. 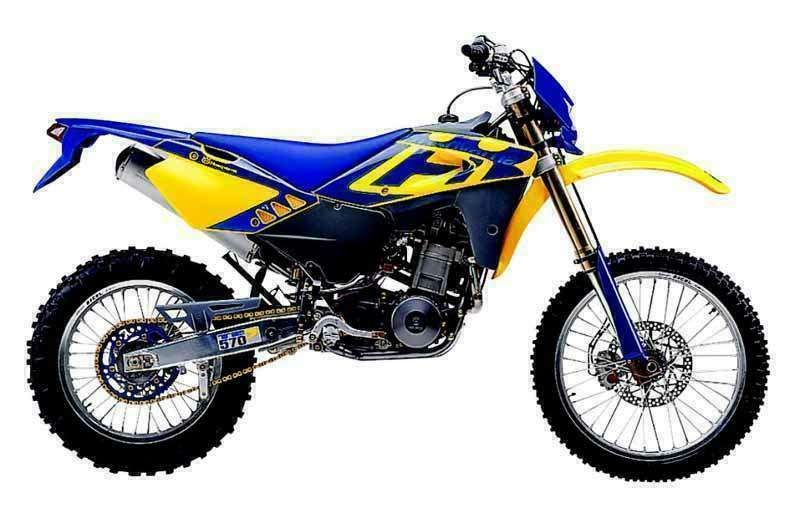