If you’ve ever sent out your wheels to be chromed or even simply ordered a part online you’ll understand how comical the scenario must have been to these shops-these things take time, ya know. Not only did the three aforementioned companies have to fabricate custom parts, but they had to get them done in a matter of days.
Miraculously, all of them came through, but if only one fell short the entire project would’ve been a bust. The situation created a cool vibe, actually, because each company relied on the other’s hard work in order for its own product to be utilized. Sort of an unspoken understanding there.
Honda’s CBR1000RR isn’t a regular on the custom bike scene in the first place, and when the task of creating a functioning turbo fell in Cycle Logic’s lap there was obviously a bit of concern whether it could be finished and working in time. Not only did Cycle Logic’s Dave Jones get the turbo fitting properly and looking amazing (check out his handbuilt airbox), but performing brilliantly as well.
While Jones hammered away on the turbo in Florida, Gregg Desjardins worked diligently to get the swingarm together on the opposite coast. Though his California-based shop has been making sick swingarms for Year: s, this was the first time his full set-up has been used. Instead of sourcing Ducati parts as in previous designs, Gregg’s Customs has developed its own hub and assembly, making the entire bolt-on package without using “borrowed” parts.
The amazing wheel that’s attached to the tubular swingarm wasn’t merely plucked off the shelf, either. Performance Machine’s David Zemla did his part in making the unthinkable happen by not only producing the contrast-cut “Torque” wheels in just days, but also the matching rotors to complement the slick rims.
These major components were at the core of the build, yet there were loads of other contributors that also helped at the drop of our helmet. Though the bike was taking shape as one of the sickest CBRs of all time, it would’ve looked rather silly with stock levers, rearsets and other odds and ends that we tend to take for granted. Not only did the parts have to be sourced, but they also needed to be in stock, in the right finish and able to be shipped immediately. Sato had the rearsets covered, while Yana Shiki contributed levers and Hotbodies Racing hooked up an undertail seat unit for clean lines. Custom Sportbike Concepts even extended its support to the competition and provided a clear clutch-case cover.
This wasn’t a rush job by any means. After all, the builder was also to be the test rider, and Fisher wasn’t going to lash the bike together simply for the sake of getting it done-not when he planned to ride it to the limit upon completion.
After Roaring Toyz painter Ryan Hathaway sprayed his magic wand over the body with Parker’s Project H dcor it was ready to hit the track…almost. Fisher is a pretty handy racer and has finished in the top 20 at Daytona’s grueling 200-mile race, so he knows a thing or two about set-up. Hopping on a bike as extreme as Project H without dialing in the suspension would be madness, and considering that, he sent it to GMD Computrac for a complete geometry optimization and suspension tune. GMD understood the essence of the deadline and spent several late nights getting the bike dialed in for its track debut.
The bike ultimately survived Fisher’s abuse around the Jennings circuit and gained the approval of the crowds at the MotoGP. It’s a pretty amazing accomplishment considering the time crunch put on the exclusive one-off parts, fabrication and set-up required to make it all work properly. Slapping a trick ride together in less than a month is difficult in its own right, but building a bike that makes a pro racer and thousands of race fans walk away with perma-grin is something special.
2007 Honda CBR1000RR 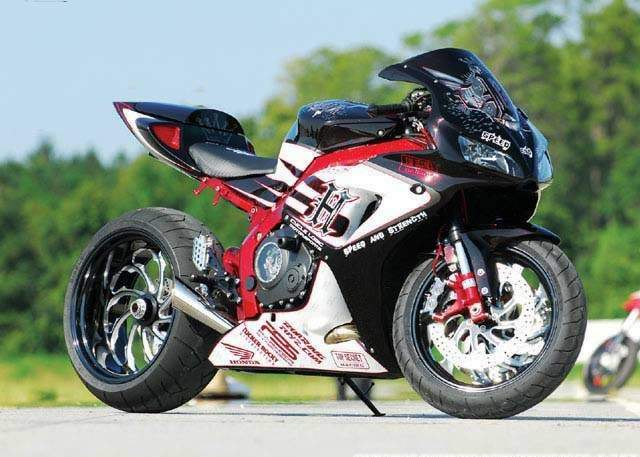