Shortly after its debut, the 1983 CB1100F earned a reputation as one of motorcycling’s true superpowers — easily the most potent air-cooled inline-four Honda’s ever built. This was Honda’s first 1100cc superbike. Its arrival remains a benchmark for Honda in the evolution of the high-performance motorcycle.

Building on lessons learned from more than two decades of racing, Honda Engine: ers created the 108-hp heart of the CB1100F. And as good as the rest of the motorcycle was, that Engine: made it a masterpiece. In Motorcyclist magazine’s December 1982 road test, the 1100 turned an 11.38-second, 118.5-mph quarter mile. Then, during Motorcyclist’s 24-hour endurance test, the 1100 covered 1,801 trouble-free miles around Willow Springs Raceway. That shattered the magazine’s previous 24-hour record of 1,690 miles, set in 1981 by Honda’s CB900F.

On the street, the magazine’s testers discovered the bike’s stunning low-end power. Throttle response was exemplary, thanks to the four constant-velocity carburetors equipped with an accelerator pump that kept throttle response very crisp.

In the chassis department, a new box-section swingarm pivoted on needle bearings. Working in concert with the steel-tube Frame: and a 39mm, air-adjustable fork, it helped deliver amazing stability and cornering. Motorcyclist later wrote, “And handle it does… nearly ideally. Bending the bike over into a turn requires very little effort at the handlebar. And it will stay there with no additional input from the rider.” After factoring in the adjustable Rear Suspension: and TRAC anti-dive control, they concluded, “Honda has won the Superbike Game hands down. The CB1100F is the best superbike Motorcyclist has tested.” 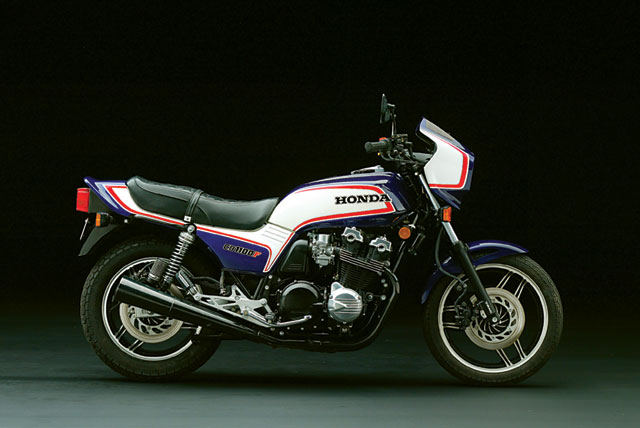