And now the Harris Magnum is back, reincarnated to carry SuzukiÕ’s oilcooled GSX-R lump – ironically the very motor whose chassis brought alloy to the masses all those Year: s ago. The 1100 or 750cc Engine: will fit but it’s the larger variant that is more appropriate, for if any modern motor is in desperate need of a well-sorted chassis it’s the GSX-R11.

While the 750 has been refined since 1985 into a superbly well-balanced sports bike, in recent Year: s the once-dominant Eleven has lurched — often literally — from one flawed chassis redesign to the next.

Both these Magnum 4s live in Glasgow. One is the company vehicle of Geraint Short, boss of the aptly-named firm Specials, whose business is building motorcycles like this. The other is owned by local speed-freak and regular customer Chris Woolacott. The two machines are as similar as you’d expect of two, well, specials: one is black, the other white; one Engine: is stock, the other tuned; one bike wears conventional forks, the other upside-downers.

Each is a variation on a theme that remains as pure and sharp-edged as the Magnum concept has always been. The Frame: dominates totally. On each side of the bike, a main tube of 1 3/8-thick Renolds 531 curves out from the cylinder head, hugging the sides of the close-finned cylinder barrel on its way to the swing-arm pivot. Another big tube runs near- vertically down to an Engine: -mount at the front of the cases. Narrower cross-members join the two, completing a ladder-like pattern that is similar in appearance to that of the Mk 1 and 2 Magnums. (The Mk 3, released in 1985, had a more conventional twin-cradle Frame: .)

The swing arm is nothing like the earlier versions, being an aluminium deltabox-style construction, with massive strengthening on top, that works a vertically-mounted Ohlins shock. Front Suspension: , like much of the Magnum’s detailing, depends on customer preference. The black bike wears 43mm forks, adjustable for preload and rebound damping, from Kawasaki’s 1990-model ZXR750. Alternatively, the white bike’s White Power units can be supplied by Harris as part of a ready-made rolling chassis. Wheels are 17- inchers in each case, 3-inch front and 5 rear, shod with Michelin radials.

Early Harris Magnums rolled on 18-inch Rear Tire: : s, mere plimsoles compared to the newcomer’s hefty 180-section Doc Marten boot, and the Mk 4’s other dimensions are equally removed from those of its predecessors. Rake and trail are 24 degrees and 104mm, a far cry from original Magnum figures and much closer to those of the stock GSX-R750. The Mk 4’s wheelbase is 1372mm, considerably shorter than the GSX- R750’s 1420mm and dinky-sized in comparison with the Eleven’s 1465mm.

Harris estimate that their baby weighs-in at 400lb dry, against the stock 750’s 425lb and the 1100’s 470lb. The Frame: itself is probably heavier than stock but the Magnum’s no-frills format and simple four-into-one exhaust system save precious pounds. The deliciously-sculpted alloy fuel tank retains the family look, as does the typically minimal
fibreglass seat unit (which holds the battery in the seat hump). Previous Magnums had fairings, when such things were novelties, but the Mk 4 makes do with just a pair of frog- eye headlights ahead of its clip-ons, and with no more than an oil-cooler to keep the flies off the Engine: .

In Harris tradition, the Magnum is produced essentially as a chassis kit comprising Frame: , swing arm, rear shock and linkages, petrol tank, seat unit, footrests and rear-brake master cylinder, plus various brackets, Engine: -plates and bearings. To that list must be added not only the Engine: , electrics, carbs, exhaust system and forks, but also wheels, brakes, yokes, handlebars, oil-cooler (the tuned bike runs two), clocks and all the hundred-and-one odds and sods that go into constructing a complete motorcycle.
Naturally, Harris will gladly supply most of the remaining chassis parts from their catalogue, with the final choice owing much to depth of wallet. If you don’t fancy forks from a breaker, for example, White Power’s upside-downers cost #600 or #1000 depending on spec. For the really rich, Ohlins’ sublime suspenders sell for closer to three grand a pair. Likewise with the brakes, where Lockheed’s calipers cost anything from #80-odd (twin-piston) through #200 (standard four-piston), to over #600 for machined-from-solid racing items with four lightWeight: alloy pistons apiece. The sky’s the limit, but Chris’s black beast provides a good example of how to construct a Magnum 4 for little more than the cost of a new superbike. As well as the GSX-R Engine: ’s neat looks and obvious performance, the thing that inspired the Harris brothers to base their Mk 4 Magnum around Suzuki’s lump was its availability at a reasonable price. Chris picked-up a low-mileage Engine: from a breaker for œ1400 including carbs and electrics, and used standard GSX-R1100L wheels in combination with Lockheed discs and twin-piston calipers. He paid Specials to put the whole lot together in seven days flat, and ended up with a total bill of around #7500.

I guess it’s a tribute to the Harris brothers’ peerless track-record — and to Specials’ growing reputation for assembling their bikes — that despite Suzuki’s series of stock-chassised lemons I never had any doubt that the GSX- R1100-powered Magnum would do the business. It looks right and it feels right: small and low, despite the width of the petrol tank and the shiny Frame: -tubes beneath it. Riding position is leant-forward with feet high, typically tight and tucked-in, but the absence of a fairing gives an unusual view past the tank and the Harris-made alloy top yoke.

The racy, naked set-up and the hollow growl from the pipe emphasise the brute’s awakening power as you pull away. But the Magnum’s handling soon puts the rider at ease; one short straight and a single lap of the nearest roundabout were all the Harris took to make me feel at home. As you’d expect from the bike’s Weight: and steering geometry, the feel at the bars is light; the feedback through low clip-ons, rigid forks and grippy rubber immense.

Flick the bitch and it responds instantly, snapping from side to side with ease and precision, ironically feeling not unlike a stock GSX-R750 (but much more nimble than an 1100…). The ZXR750 forks were well up to the job, though the black bike’s Ohlins spring was a shade hard, sending bumps through the thinly-padded seat, putting too much Weight: on the front-end, and causing the occasional handlebar-flutter when I shut off the gas in mid-turn. The white bike floated over the same bumps and was rock-steady no matter what the provocation, thanks as much to its shock’s softer spring as to the equally exemplary White Power front-end.

And it sure was nice to have all that GSX-R muscle on tap, harnessed in a top-notch chassis and ready for instant explosion. Suzuki claim 143bhp from the 1100 in unrestricted form so running standard carbs, K&N filters with a stage- three Dynojet kit, plus the less-restrictive pipe, it’s reasonable to reckon the black Magnum was kicking out over 150 horses. On a bike this short and light, and with the stock GSX-R’s legendary midrange punch backed-up by crisp carburation, that was enough to provide the Magnum with suitably bullet-like acceleration from virtually any speed.

Cracking the throttle sent the bike leaping away, jerking me backwards as it headed towards a top speed that would have been determined mainly by my ability to hang on to the clip-ons. On a short stretch of Glasgow by-pass the Harris howled past 130mph and kept accelerating, wind tugging at my neck, before a roundabout intervened. Then it was hard on the powerful Lockheeds to stand the Magnum on its nose, proof that if those old twin-pot calipers are hardly trick any more they’re still very good brakes indeed.

And that was just the standard-Engine: d bike. Geraint’s 1340cc Magnum, kitted-out with 85mm Cosworth pistons and running a 14.5:1 Compression Ratio: , cost #9500 all-in and makes an estimated 170 horsepower. (Running slightly rich, it has been dyno’d at 163bhp.) Exiting a corner is second gear and rolling-on the throttle had the front wheel lifting instantly and thrillingly every time; short-shifting into third sent the bars light again as the trememdous torque cut back in. Geraint has had the bike flat-out at over 160mph for five miles on a German autobahn (an experiment ended when his mate’s tuned RG500 seized while trying to keep up), and reports that it was rock-solid all the way. So, presumably, are his biceps — but then the Harris Magnum always was a fearsome beast, a real musclebike, and the Mk 4 version is the most potent Magnum of all. This latest Harris may be shrunken and sharpened for the ‘90s, but at heart it’s still a creature of the wild, sexist ‘70s. Macho, aggressive and brutal; it’s all those things and more. Wimps and New Men need not apply. But for heavy-metal fans everywhere, this is the bike for you. 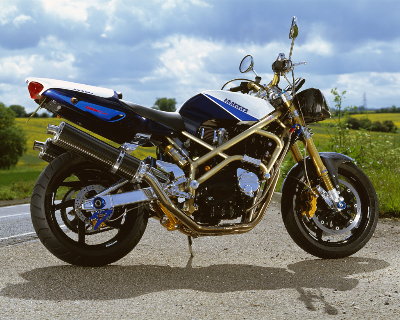