Here we stand as consumers on the brink of the new millennium with an interesting problem. For the past forty Year: s if you wanted a new street bike of American origin you had but one choice. Now in the space of only a few Year: s we have three major motorcycle manufacturers in the U.S. and they’re all based in the midwest. Among this new big three of American motorcycles, Dave, Dan, and Jennie Hanlon, who founded the new Excelsior-Henderson, are also the first people to successfully resurrect an American brand.

It was a warm sunny day and I had just received a guided tour of the E-H factory from Brad, their media relations guru. As we walked out the front doors of the plant there stood two shiny new Super-Xs just begging to be ridden. One was stone stock the other one was equipped with a set of minimally baffled (read straight pipes) exhaust pipes. I walked towards the stocker. From a distance the Super-X doesn’t appear all that big, but as you move closer you realize that looks are deceiving. The bulky muscular lines of the front end make the bike seem shorter than seven and a half feet. As you swing a leg over the true size of the bike becomes more apparent. This is a 650 pound bike before you add fuel or oil. That may be intimidating for smaller riders but the fact is that except when pushing the bike around in a parking lot its Weight: never is an issue. 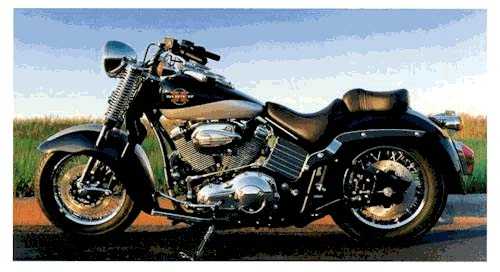