After riding Bologna’s finest in our 2007 Aprilia RSV1000R vs Ducati 1098S comparison , I was dreaming red. Night after tumultuous night, visions of blurred pavement mixed with that oh-so seductive sporting twin thump-thump-thump exhaust bark bellowing from behind was all I could imagine. Those two epic days of blasting around Buttonwillow Raceway exposed the Ducati for the Superbike thoroughbred it is and, alas, Ducati’s 1098S is permanently etched into my subconscious. Like any true addict, we keep our ears to the street, so when we heard that Ducati North America had thrown a whole slew of Ducati Performance accessories onto a new 1098S, we just had to have our fix.

To make sure that we’d be able to extort full performance out of this 145 horsepower sled, we slung on the stickiest rubber we could find – new generation Pirelli Diablo Superbike slicks (120/70-R17 front, 190/55-R17 rear). All decked out we made the trek inland, to a Fastrack Riders Association trackday at California Speedway in Fontana, California. The 20-turn AMA-spec course would be the perfect playground to test the track blitzing prowess of this Bolonga hot-rod. Let the games begin.

The 1098 is already known for its powerful, stump-pulling 1099cc L-Twin mill. Rather than building the 1098 mill to the moon and sacrifice reliability, the boys up north choose to leave it entirely stock, except for a pair of lighter and stronger titanium connecting-rods. Lighter con-rods reduce reciprocating mass and help the Testraretta Twin build rpm’s much more quickly. In fact, getting the revs up quickly and keeping the Engine: on the massively wide powerband is what these Corse go-fast goodies are all about.

Lurking inside those narrow Engine: cases is an incredibly trick (and expensive) Corse racing gearbox. To say that the Corse racing gearbox is close-ratio would be an understatement. Besides the track-oriented super-tall first gear – which is good for over 80-mph, but also requires much more clutch work than a stock 1098 off the line – second through sixth gears are only seconds away from each other.

Exit the final second-gear left-hand turn coming onto Cal Speedway’s NASCAR oval, nail the throttle and let the gear banging commence. The horizontal LCD rpm bar swings wildly to the right and we’re stomping down on the billet shift lever (race-pattern) as fast as we can, trying to keep the Duc out of the triple red shiftlights atop the Digitek MotoGP-style dash. Normally we would consider a lot of shifting a pain, but it is incredible how the racing gearbox allowed us to keep the Engine: zinging in the meat of the 1098’s 80-plus lb-ft of torque, from 7700 rpm on to its 10,700 rpm redline.

Moments later and inches away from the NASCAR wall to the right, we glance down and see an indicated 165-mph in top-gear with one solo shiftlight blaring. We pop out from behind the protective tranquility of the windscreen, grab one downshift and muscle the 56.3-inch wheelbase Twin into Turn 1.

There’s no denying that the racing tranny requires constant attention. Helping to make sure that it gets the love it so desperately needs is a set of fully adjustable billet aluminum Corse foot controls. The bolt-on, easy to manipulate units offer a variety of different mounting points, which makes them suitable for riders of all size. Shifting action was notchy but precise and the stubby pegs themselves had a solid and grippy base, which made sure our feet never slipped off the pegs (except for a particularly over-zealous throttle stab mid-corner. but, um, never mind.)

Keeping the desmo-valve equipped Engine: singing is a quarter-turn aluminum throttle. The Corse unit allows an even faster flood of fuel to the throttle bodies, all while maintaining smooth twist action. In addition to the increased G.G.J.F.C. (go-go juice flood Capacity: ), the quarter-turn throttle has very precise feel and it bridges the gap far better than the stock setup, allowing the rider to feel every soulful power pulse from the potent L-Twin.

Helping to heighten overall throttle response and boost power output throughout the rev range is the superlight 70mm Termignoni 2-1-2 full race system. Installing a race exhaust is one of the first and most popular mod 1098 owners are likely to do. Termignoni and Ducati have built a relationship based on racing championships, making the exhaust to run if your riding Red. The multi-piece Italian-made system snakes through the 1098’s insides and is pure contemporary moto-art. The thick, gold-colored pipes will uncork both noise and horsepower lurking within that pristine bodywork. The $2800 exhaust comes with a replacement ECU and a racing-style air filter, which all work in unison to maximize power gains. The entire setup is literally plug-and-play, with no remapping or other Engine: tuning required – just bolt on and ride. Ducati claims an 8-percent power increase over stock and a quick look at the dyno chart courtesy of Mickey Cohen Motorsports (714- 993-5000), confirms the power increase over the heavy, restrictive stockers.

In addition to the benefits of pushing exhaust out faster, the bark that emits from the twin carbon fiber canisters is the most delightful mechanized racket we’ve ever heard. But, beware, because when the 1099cc Engine: is alive, anyone within one a three-hundred foot radius will both hear and feel the big power tremors being pumped out from the big-bore Twin. And if that’s not enough, the teeth rattling jangle-jangle-jangle of the open-air Ducati Performance dry racing slipper clutch will make common folk scatter out of your way as if it were Satan’s own steel-Frame: d steed. 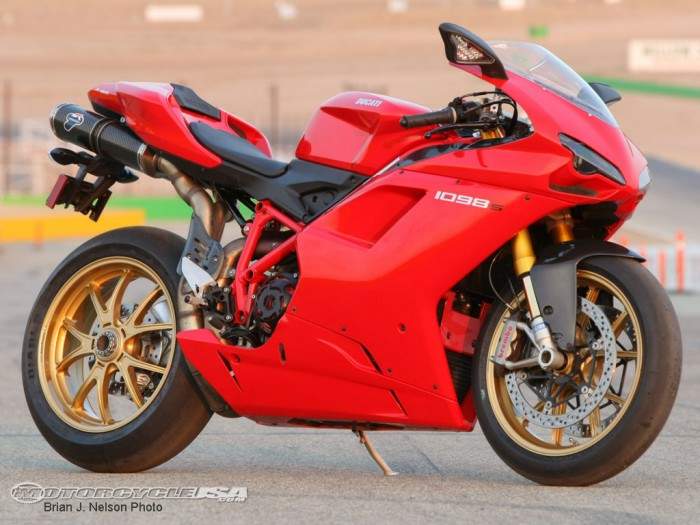