Sneaking in under the radar is news about a major update to Ducati’s entry-level Monster, one of the Italian company’s best-selling models and one key to its marketplace success.

What started as a 583cc V-Twin was bumped up to 618cc in 2002. This bigger motor in conjunction with a new fuel-injection system dramatically livened up the baby Monster, and its beefed-up Frame: made it a better handling machine.

But a revitalized little Monster is set to make some waves this summer with its new 695cc Engine: . The additional 77cc of displacement comes via an 8mm increase in bore and a 4.7mm shorter stroke (88 x 57.2mm). Claimed horsepower jumps from the 620’s 63 ponies to 73 hp for the Monster 695, a worthy 16% improvement. Peak torque is boosted only slightly, from 41.2 lb-ft to 45.0 lb-ft, both at 6750 rpm, but the extra displacement should result in much improved snap at the low-end and midrange. Ducati says this is the highest output per cubic centimeter of its air-cooled Engine: s. A catalyst and oxygen sensor help make the bike’s emissions Euro 3 compliant.

Importantly, Ducati has lengthened the interval between its first required service. Previously, a valve clearance inspection was mandated at just 6000 miles, much less than any of its competition. But this new motor gets that number extended to a more palatable 7500 miles. The new Monster, as with most Ducatis, has a two-Year: unlimited mileage warrantee.

The 695 uses the same transmission and primary-drive ratios as the 620, but the final drive gearing is radically different. The countershaft sprocket remains at 15 teeth, but the rear sprocket goes from 48 to 42 teeth. This results in a much taller final-drive ratio, going from a short 3.20:1 to 2.80:1, which should be more relaxing on the highway but less punchy at lower speeds. Wheelie hounds might want to fit the larger sprocket.

Aside from its new motor, there’s not much that’s different with the 695 Monster. Cosmetically, its side panels now have the Italian tricolore flag and larger “Monster” lettering, and the “Ducati” tank logo is now white instead of silver. One small but notable revision is the work done to hide its electrical wires and connectors, doing away with nasty-looking cable ties and making the Monster look even cleaner.

Otherwise, the Monster 695 is the same lovable mount as the 620, using the matching trellis Frame: , rake (24 degrees), wheelbase (56.7 inches) and wheels, plus the same 370-lb claimed dry Weight: and 30.3-inch seat height. Suspension remains a Sachs shock adjustable for preload and rebound and a non-adjustable 43mm Marzocchi fork. Brakes are unchanged from the twin-piston Brembos up front and a single-piston caliper in the rear. The 695 also uses the 620’s Adler Power Torque Clutch that provides an easy clutch pull with the added benefit of a “slipper” system that diminishes rear-wheel lockup when downshifting from high rpm.

This burlier baby Monster is now rolling off the assembly line and should be available in North America this June. Best of all, its retail price of $7495 is unchanged from the old 620 version. Three color options will be offered: Red with a red Frame: , flat black with a black Frame: or, our favorite, black with a red Frame: . 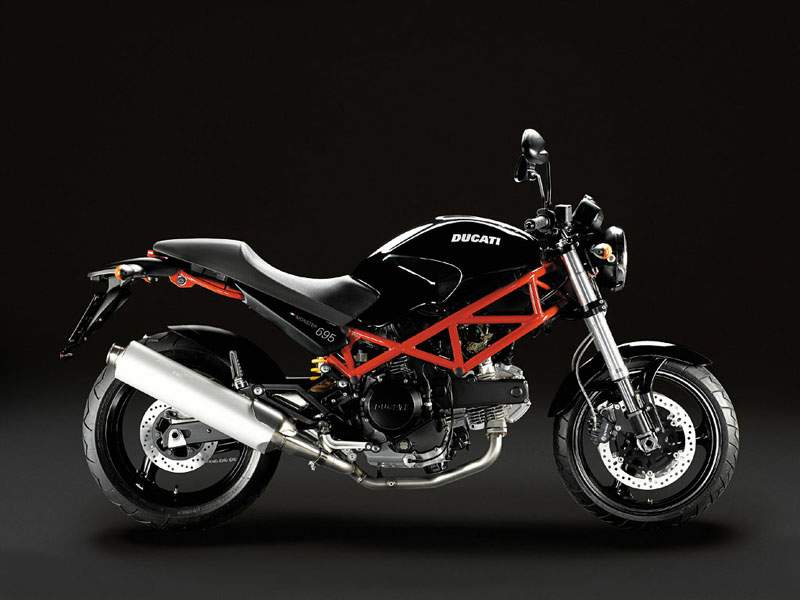