The XESS (eXtreme European Streetfighter Styling) version of the CB1000R draws on the most extreme potential of this new Naked streetfighter’s intensely aggressive power. It focuses the customer’s attention on the eventual possibilities for modifying the production model to make it even more stunning.

The original CB1000R was intended to stimulate Honda Emotion; to be number one in the Sports-Naked category and the ultimate bike for two-wheel enthusiasts. This was achieved through its innovative and challenging design and through such impressive technology as the ex-Fireblade inline-4 Engine: , the long-and-low underslung exhaust and the hybrid aluminium swingarm. Incorporating impressive handling and a sporty nature, our plan for this model is to become the big Naked queen of the long and winding roads.

Our goal with the XESS is to allow CB1000R customers to shine out in the crowd (even more!) and give them really breathtaking added value. It is similar to our much-appreciated initiative with the Hornet 600 in early 2006. It’s clear that Naked customers like to customise their bikes, so we decided to sow the seeds of imagination with a reality model.

The XESS represents the most radical and extreme styling of the new Italian-designed CB1000R. Just as Honda represents “The Power of Dreams,” the CB1000R should be considered “The Model of Dreams” in the Naked category – a dream bike starting with a unique Honda basis and cutomised with the most impressively designed accessories.

If the CB1000R is a spectacularly emotional bike, the velvet-red XESS builds even more on that emotion – aggressive as a panther and ready to holeshot with a premium motorcycle image. That’s why the tank is graced with the new Honda Wing emblem that only decorates top-end models like the RC212V, the Fireblade and the DN-01.

This impressive customization of a brand-new motorcycle model with quality custom parts is yet another unique and visionary initiative from Honda.

The XESS project was carried out by a local workgroup in Italy. Vito Cicchetti (General Manager, Honda Italy) proposed the initial concept and positioning, while Fausto Giancristofaro sought out suppliers of the most passionate parts and coordinated the realisation of the special model’s.

The many parts that have been added or changed include: a special Showa-signed and anodized massive front fork, Hanabira front discs with radial-mounted front callipers, a titanium twin-exhaust, lighter and race-ready footpegs, an aggressive red transmission chain, reversed levers, a velvet seat and several carbon fibre elements (such as the front mudguard, front light cowl, rear hugger, side covers and rear seat cowl).

The concept, drawings and development of the mass production model were established by R&D headquarters in Roma with the support of the Italian Sales Division. With its already sensational design, it provided an ideal basis from which to develop such an impressive and aggressive prototype. The result is a model that celebrates traditional Honda quality with 100% Italian design. 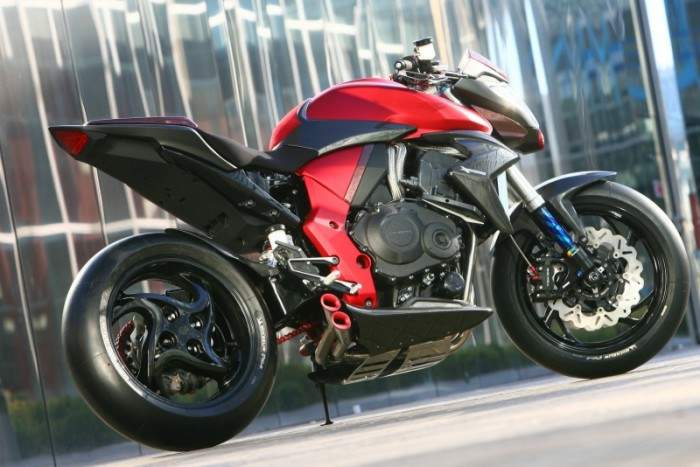