Italian beauty. Frame: and rolling gear for the prototype Husqvarna 501-powered Cagiva Mito 500 are carry-over Mito 125 items. Weight: is minimal, wheelbase is compact. Seat height is 29.9 inches, low for a modern-day sportbike.
Now it has been revived—and with the real amateur spirit. One of the riders is Roberto Tamiazzo, a former member of the Cagiva 500cc GP technical team and a competent mechanic and rider. Working in Cagiva’s R&D department, he has the opportunity to test, tune and hone nearly everything being produced there, Husqvarna Engine: s included. He thought it logical to build his own Super Mono racer by transplanting a four-stroke Husqvarna 501 into a Cagiva Mito 125 chassis. Conceived as a ¾-scale Ducati 916, the Mito two-stroke was a good-looking piece (see lead photo). Still is. Anyway, he did some copy/paste graphics trickery on his computer and found that the potent enduro-oriented Engine: didn’t need a pry bar to help it fit into the Mito Frame: . Even the chain line was the same!

The operation was completed in a fairly short time—as a strictly private venture. Only modification was the insertion of special rubber bushings into the front Engine: mount to completely cancel residual vibration the balancing shaft (originally conceived for the then-250cc Single) could not deal with. The bike performed superbly at the track, and at that stage the concept received some attention from top management. The bike was refurbished for the show circuit and audiences expressed great approval for a bike that would be great fun on the road—though it had better be a very twisty one!—for a small investment.

Simplicity begets simplicity. When you have less than 300 pounds to stop, a single disc will do just fine, thanks.
Tamiazzo is working to reduce Engine: vibration even further and improve long-term reliability. Or he may develop a new, application-specific Engine: . In the case of the latter, he has identified the ideal displacement to be around 580cc. It would have a very short stroke, dual overhead camshafts and four valves and produce around 80 horsepower. There would be a lot of the Husky unit in it, but for longevity purposes the pressed crankshaft turning on roller and needle bearings would have to be replaced with a solid shaft running on plain bearings. Above all, it had better be as compact as the Husky 501, a 97.0 x 67.8mm, dohc four-valver now sporting Mikuni electronic fuel-injection and producing no less than 60 hp and 38 ft.-lb. of torque, more than adequate for outstanding performances from a bike that only weighs 293 pounds.

Maybe this prototype will start a new trend. If not, it’s still not bad for a one-man (though highly experienced) effort. 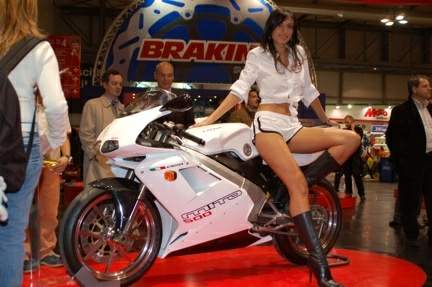