For Year: s BMW has offered buyers a varied line-up of sportbikes, tourers, and dual-purpose machines with Engine: configurations ranging from twins to triples to fours. Despite this wide range of styles and powerplants, not since 1967 has BMW built a single-cylinder machine designed for the beginning rider.
That has changed with the 1997 F650. After three successful Year: s in Europe, BMW has finally brought their popular single to North America. With its unintimidating 652cc single-cylinder Engine: , lightWeight: chassis, great ergonomics and tremendous flexibility, it just may have been worth the wait.
Inspiration for BMW’s F650, dubbed the Funduro in Europe, came when company representatives visited Aprilia’s factory in Italy. At that time, Aprilia was in the final stages of production on their Pegaso 650, a high-performance bike powered by Rotax’s liquid-cooled five-valve single. The innovative German firm quickly recognized the benefit of cooperative effort between these manufacturers, and immediately sought their assistance in releasing a similar model. By using a Rotax Engine: in a bike built by Aprilia, all to BMW specifications, an important beginner-level bike could be added to their line at a competitive price.
For BMW to use an Austrian Engine: in a bike built in Italy and still have it look and feel like a BMW required careful design planning. Various configurations were experimented with before the final nod was given to a draft by freelance stylist Martin Longmore. An Englishman now living in Bavaria, Longmore’s concept while designing the F650 was “to create a harmonious blend of aesthetic, technical, functional and innovative qualities with emotional appeal – a blend providing that unique touch which makes every BMW absolutely unmistakable.” One look at the F650 will tell you that Longmore’s design was successful. While the bike has many styling touches of its own, the family resemblance to R-series Boxers is undeniable.
Chassis design is fairly straightforward. A square-section steel Frame: carries Engine: oil in its top tube and uses the Engine: as a stressed-member to increase rigidity. A pair of 41mm forks with a generous 6.69 inches of travel handle suspension duties, while a single shock with hydraulic preload adjustment and 40-position rebound damping is used in the rear. Swingarm construction is of aluminum-alloy to reduce Weight: . Braking chores are handled by a single four-piston Brembo caliper putting the squeeze on an 11.8 inch disc on the front wheel. A twin-piston caliper grabbing a 10.9 inch disc is used at the rear.
Equally crucial to the F650’s success was an Engine: that provided the smoothness and reliability that BMW and its customers demand. Rotax has long been one of the premier manufacturers of large-displacement single-cylinder four-strokes, and their five-valve Engine: had a proven track record. Still, BMW made several Engine: modifications to suit their needs. Rotax’s dry-sump lubrication and single-piece connecting rod were retained but the Engine: ‘s roller bearings were changed to low-friction plain bearings in the interests of longer life and reduced mechanical noise. A K-series styled, pent-roof, four-valve combustion chamber with dual overhead camshafts, bucket tappets and shim-type valve adjusters was used. The four-valve head provided room for a dual-plug setup that adds horsepower while lowering exhaust emissions, an important concern for BMW. Feeding the Engine: is a pair of constant-vacuum Mikuni carburetors, each with its own intake port. Similarly, exhaust gases are carried out by a pair of headers through twin ports. These modifications allow the Engine: to produce a healthy 48 horsepower at 6500 rpm with 41 lbs-ft of torque at 5200.
Riding the F650 shows that BMW’s Engine: ers have done their homework. Performance is linear throughout the entire rev range, and the motor is surprisingly smooth for a single. This Engine: likes to rev, and is more than happy to pull beyond its 7500 rpm redline. However, that tendency to rev means some low-end grunt has been sacrificed. Wheelies? Sure, with some effort: But if you’re looking for XR600 stump-pulling torque, you’d better check elsewhere.
Around town, the BMW’s long-travel suspension make commuting a breeze. Handling is quick and predictable, due mainly to the F650’s light (421 lb. wet) Weight: . Brembo brakes enable the rider to avoid even the most inattentive commuter. Meanwhile, the 6.69 inches of suspension travel provided by the front forks easily soak up even L.A.’s huge earthquake-sculpted potholes.

While Engine: vibration makes some dual-sport singles a chore to ride at freeway speeds, the F650 is as smooth as many multis. Cruising at 75 mph is comfortable, and vibration isn’t more than a mild buzzing. Only at 80 mph and beyond does the buzz increase to the point of annoyance. However, buffeting at these speeds is tiresome due to the tall windscreen. Here the street-only F650ST’s lower screen would be preferable. Seat comfort is good, allowing several hundred miles to pass without complaint. Fuel mileage was excellent with a combination of fast freeway and city riding yielding 50 miles per gallon. With its generous 4.6 gallon tank, a cruising range of 230 miles is possible.
experienced riders will also appreciate its combination of simplicity, light Weight: and refinement
Adding to the long-distance capability of the F650 are its optional saddlebags, top case, heated handgrips and electrical accessory socket. Our test unit came equipped with a set of BMW’s K-series saddlebags. While pricey at $645 plus another $197 for the mounting hardware, these bags offer tremendous carrying Capacity: . With its ability to carry both a full-face helmet and 18-pack of cans with ease, the F650 proved itself a valuable mule. Also available is a top case for $315, plus $96 for the mounting kit. Another option is a set of smaller city cases for $331. However, like all of BMW’s K-series luggage they still use an awkward mounting system. Attaching the bags always seemed to take a few minutes longer than we would have preferred.
Similar to the R1100GS, the F650 version is offered as a dual-purpose bike. Off-road its light Weight: puts it miles ahead of its portly big brother. While nobody is going to enter an F650 in the Baja 1000, it does possess a surprising amount of dirt capability. We took the F650 to our official MO off-road test area and found that, while it did bottom out over larger bumps and get out of shape on fast bumpy sections, it could be ridden with reasonable confidence through areas where larger adventure bikes would fear to tread.
Shorter riders will be glad to hear that BMW offers a lowering kit for the F650. Unlike other BMWs with adjustable seat heights, the lowering kit actually drops the center of gravity, via a modified swingarm and shock stop. Shortened side and centerstands are included with the kit.
BMW’s F650 is a complete, refined motorcycle that’ll do many things well. It’s as capable of exploring bumpy dirt roads as it is commuting or highway touring. While it may be an attractive model for beginners, experienced riders will also appreciate its combination of simplicity, light Weight: and refinement. 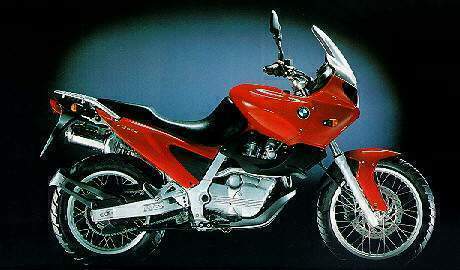