n race trim, this motorcycle won the 1987 Formula-One World Championship and ended five Year: s of Honda domination in the most important four-stroke racing class. It was a victory that marked the arrival of Bimota on the world stage. The tiny Italian factory had taken on the mighty Japanese works teams and beaten them fair and square. Originally the YB4 was a pure racer unavailable for road use. With the advent of the World Superbike Championship in 1988 and its strict homologation rules, Bimota were obliged to build 200 YB4s in order to compete. Inevitably some ended up on the street. They also took the opportunity to make one important change – their Formula-One racer had been normally carburated, but the YB4 that finally went into series production was fuel-injected. The YB4 has always used a Yamaha FZ750 Engine: , the pioneering five valve, steeply inclined unit launched in 1985. The standard FZ Engine: never lacked top end power but was weak in midrange and low down output. It takes some winding up. Bimota’s aim was to boost performance through fuel injection. The Weber Marelli electronic system in concert with the ignition advance liming meters the optimum amount of fuel and air through an injector into the intake manifold, to produce the ideal charge at a given rpm.

There are sensors to measure the throttle opening, phase of the Engine: , coolant and air temperature, and air pressure is regulated at a constant three bars. Ignition modules adjust the coil charge, and the whole system is managed by a black box which has an interchangeable chip. In theory, unburn! gases are minimized and fuel consumption reduced. As the Engine: is being fed the ideal mixture, power is increased across the rev range. Although very fast in a straight line, it is not power that gives the Bimota its main advantage, rather it is power-to-Weight: and a beautifully crafted chassis keeps that Weight: low. The YB4’s dry Weight: is a keen 180kg. 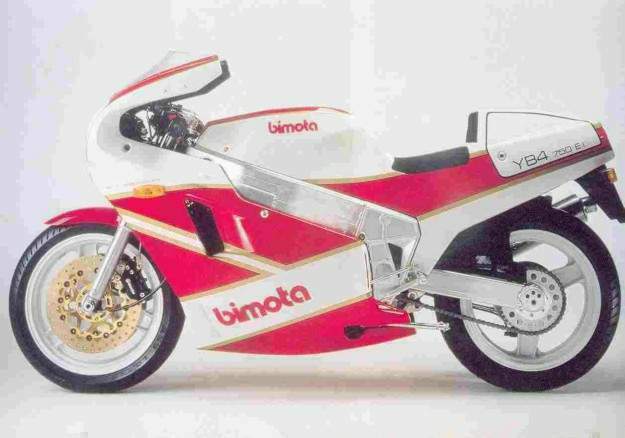