The YB 11 justified its Superleggera, or ‘superlighf, name by scaling just 4031b (183kg), a substantial 331b (15kg) lighter than the Yamaha YZF1000R Thunderace that supplied its 1002cc four-cylinder Engine: . Although the Frame: ‘s main beams were unchanged from the YB6, the top cross-member was located nearer the steering head, adding rigidity. A sophisticated Paioli rear shock operated a new aluminium swingarm; Paioli also supplied the large-diameter front forks. Bimota made no internal changes to the 20-valve, liquid-cooled Thunderace motor, which in standard form produced 145bhp. But the Rimini firm fitted a larger airbox, fed via ducts in the fairing nose. According to Bimota. this added a few horsepower in conjunction with a new four-into-one pipe and reworked carburettors. Although the YBl I shared its Engine: and chassis type with the YZF1000R. the two bikes felt distinctly different. 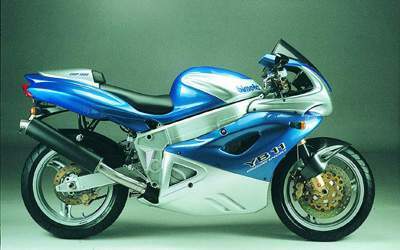