The successor to the SB6 had one very significant change; a fuel injected GSXR750 Suzuki motor, delivering even more horsepower. The SB7 was another step along the road for Bimota in refining their unique vision of what the ultimate sports bike should be all about. In every other way the SB7 was pretty much the same as its predecessor, a stunningly beautiful, handcrafted, bespoke missile. Incredibly light, with superb suspension and brakes, the SB7 was built for riders who wanted to indulge themselves at high speed and damn the expense. It was almost the perfect road, and the SB7 was just about the perfect bike on which to tackle it.

The route back to Rimini from the hilltop principality of San Marino was a mixture of fast and medium speed bends, separated by short straights, with a racetrack-smooth surface and hardly a car in sight.The Bimota gobbled it up in fine style, much happier to be back on the right kind of tarmac after the tighter, bumpier country roads on which it had been far less comfortable (in more than one sense) earlier in the day. On the straights the SB7 stonked up to its 14,000rpm redline through the lower gears, flicking crisply back down the close-ratio box before slicing effortlessly into a bend. Then it howled off again, fat Hi-Sports gripping hard and the tacho needle never dropping below eight or nine grand.All too soon I was back at Bimota’s base, pulling off my helmet to enthuse about the ride – and to discover that I’d just been hammering down factory test-rider Gianluca Galasso’s favourite local stretch of road. The SB7 had been developed partly here but mainly on the racetrack, they told me, which explained a lot about the most single-minded of this Year: ‘s new Bimotas.Although the GSX-R1100 Engine: d SB6 is a blindingly fast, no-compromise sportster, the SB7 – powered by a modified version of the water-cooled motor from Suzuki’s GSX-R750 SP – is revvier and even more narrowly focused. It’s more of a racer on the road, designed as the basis for the machine that Bimota hopes will be a contender in next season’s World Superbike championship.Paintwork apart, the SB6 and 7 are visually almost identical. 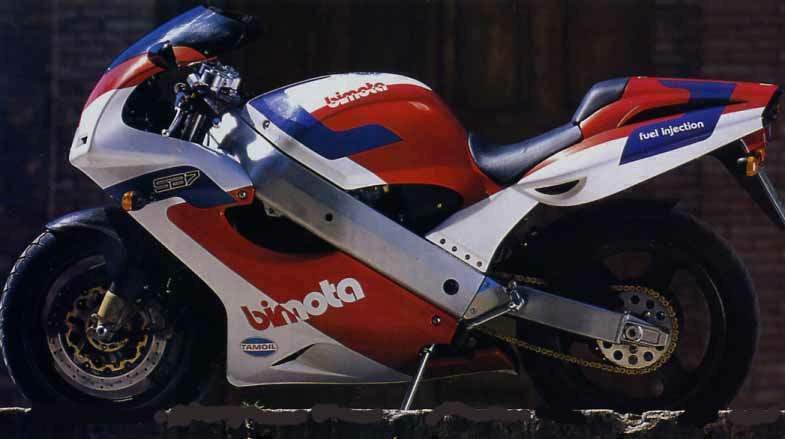