Chasing the setting sun to get the SB2 home before dark provided an excuse for a last, fast ride—and the perfect opportunity for the Bimota to show its class. It carved through the narrow, winding lanes with great H e. Then, when the road opened out, the bike showed its pure H id, pushing me back in the single seat as it stormed toward a H speed of over 130 mph (209 km/h). The miles flew past and H i the SB2 was back with its owner, just as the sun dipped below the horizon. Such performance is nothing special by modern standards, but m: .reveling was very different in 1977, when this Bimota was Ht Back then such speed and agility from a roadgoing superbike He just a dream—unless you were one of the fortunate few owner of an SB2. Created with pure performance its only criterion, that Bimota was the most exotic and advanced sporting roadster of the SB2’s brilliance is more easy to understand when you realize i-is, the first ever Bimota streetbike, was designed by none other than Massimo Tamburini, architect of the Ducati 916 and MV Agusta 750 F4. Tamburini was then the “Ta” of Bimota, the Rimini firm that he had founded in 1966 (initially to make heating and air-conditioning units) with Messrs Bianchi and Morri. The maestro’s signature is plain in the SB2.

The Bimota’s styling is as dramatic, if less sleek, as that of the 916 and F4. And like those bikes, the SB2, powered by the four-cylinder Engine: from Suzuki’s GS750, backs up its radical look with a beautiful and advanced chassis incorporating steel Frame: tubes, state-of-the-art cycle parts, and an abundance of stylish details. Chassis Engine: ering was Bimota’s specialty from its earliest motorcycling days. The first ever Bimota bike, the HB1 of 1972, was a Honda CB750-powered machine built for that Year: ‘s Imola 200-mile (322 km) race. The firm provided the chassis for the Yamaha on which Johnny Cecotto won the 350cc world championship in 1975, and the Harley-Davidsons that Walter Villa rode to both 250 and 350cc titles in the following season. 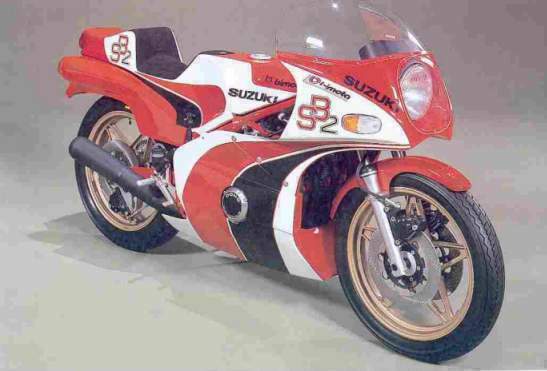