A better Bimota: DB1SR. By Bruno de Prato, July 1987.In 1986 when bimota Engine: ers mated one of their chassis to a Ducati Engine: , they created a motorcycle, which became their best selling bike and boosted the companies’ reputation by more than any of its previous machines. The DB1 changed Bimota from a small volume specialty house into a recognised manufacturer of prestigious, quality designed motorcycles.It all happened during Bimota’s darkest hour, with former partners Massimo Tamburini and Guiseppe Morri fighting over the companies’ fate in a Rimini court, and Bimota running out of financial breath. You’re looking at the happy epilogue. Outwardly nearly identical to the standard DB1, The DB1SR incorporates tuning changes that make it the motorcycle Bimota would have loved to have built first, the true Bimota, unfettered by bureaucratic compromise. Business sense prevailed against producing the SR – until now.

To survive financially, Bimota needed to sell DB1’s in the world market, and strict homologation in Switzerland, Holland and the United States – particularly noise laws – dictated the 750 cc Pantah F1 Engine: in the DB1 wear restrictive air cleaners and a civilized two into one exhaust. Historically, Ducati Engine: s make their best power when they breathe freely, and the more muffler and airbox volume, the better. Yet Bimota’s DB1’s natural density meant that the airbox and mufflers had to shrink.The Rimini’s companies’ reputation is founded upon elegant, nimble machines, but nobody wants a stone. (Our test unit cantered through the quarter mile in 12.61 seconds at 104 mph, May 1986). The DB1 needed more punch, and with the SR Bimota took the direct Italian path. Forget the noise – this Bimota is only for countries liberal enough to savor its sound.Dr, Frederico Martini, a graduate of Ducati’s research and development department and the man who designed the DB1 Frame: , knew exactly where to look for the missing power. Gone are the restrictive air filtration units and the heavy twin exhausts, the skimpy 36mm carburetors are history too. This 750 breathes through Malossi modified 41mm Dell’Ortos, complementing a pair of Montjuich specification camshafts, Martini would have used the excellent Ducati NCR two into one racing pipes, but these must be excessively modified to fit the DB1 chassis. Martini experimented with various exhaust systems on Bimota’s DB1 race bike last Year: , and chose a pipe for the SR, which quits the bike without strangling the Engine: . With the larger carbs, Martini wanted the SR’s ports cleaned up. For smooth airflow, intake ports are machined to 34mm – the same diameter as the carburetor throats downstream from their venturis.Martini’s experience pays off, the homologated European spec. SR Engine: produces (claimed figures) 82 horsepower at the crankshaft (about 75 at the rear wheel), an increase of 15 horses. Top speed is 142 mph, quarter mile times in the low 11’s, good for any 750 and phenomenal for a twin. From aboard the SR, the exhaust note sounds loud but low pitched, not fatiguing. But the intakes bark loudly up through the fibreglass body shell, forecasting the bit this Engine: holds in store. Surprisingly the bike will idle, though tunes as hot as it is the SR burps and coughs below 3000 rpm. From 3000 rpm to 10,000 rpm the Engine: pushes like a hydraulic ram, with no flat spots or dips. Torque does not “come in” it is everywhere.A tachometer has never been so useful on an Italian twin. The DB1SR is so smooth, so even in its power delivery that an inattentive rider can easily over rev the Engine: . Our first test ride on the DB1 last Year: , we said the chassis felt rigid enough to take another 20 horses gracefully. Here is proof. On the track the SR delivers a remarkable riding experience, barely this side of pure road racing, even if you are just out for a leisurely ride. On the road the Bimota’s handling and power means extra confidence and a broader safety margin. This is familiar praise to anyone who has ridden a Bimota – for the SR we have another laurel to add. Past Bimota’s have often been too stiffly sprung for comfort on the street, but the SR, as tight and racy that it is, negotiates bumpy surfaces without beating its rider into an early submission.Only one point spoils the symbiosis between rider and machine, the SR has an overly stiff clutch lever. Ducati’s punishing clutches are legendary, but this time it is not the Engine: builder’s fault – it has to do with the SR’s brakes. The DB1 SR uses a par of Brembo four piston calipers on its front disc. To actuate these properly, a master cylinder with a round, remote reservoir mounted atop the right fork leg. This reservoir / master cylinder combination comes with a 16mm bore only. Although the clutch requires a 13mm bore master cylinder for perfect actuation feel – that is the size the Paso uses – Bimota fitted the “16” cylinder on the left as well, for the sake of symmetry.Bimota plans to continue producing the stock DB1 for places with noise restrictions and wealthy neighborhoods – the standard DB1 goes for five bucks under $12,000. To that lofty figure add another $2500 and a full throated exhaust note for the DB1 SR. Most of us will never own one of these exotics, but Bimota wants only satisfied customers, and for people who bought a DB1 last Year: and now think their bike is less than perfect, the company offers an SR conversion kit.Until Ducati sees fit to send some four valve, liquid cooled Engine: s down Rimini way, the DB1 SR stands as the closest incarnation of the true sporting Italian motorcycle. 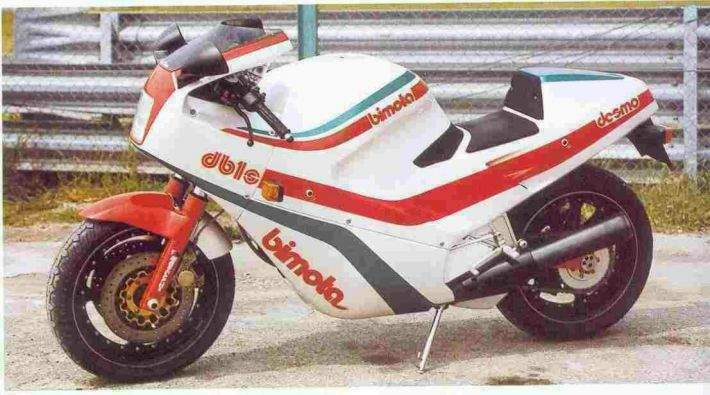